Football legend Pelé turns 80 this Friday and to mark the milestone he has recorded one of his own songs with Grammy-winning duo and Grafton Street buskers Rodrigo y Gabriela.

Acredita No Véio (Listen To The Old Man) was written by Pelé in 2005 and is one of many songs penned by the legendary sportsman.

"I've written many books, I've scored many goals, I've fathered children, I've planted many trees. The only thing that's lacking is a musical memento of my life." Pelé says of the new tack, adding that he has long been a music fan and a songwriter but has rarely spoken about it.

"I didn't want the public to make the comparison between Pelé the composer and Pelé the footballer. That would have been a huge injustice - in football my talent was a gift from God, music was just for fun."

Rodrigo y Gabriela, who began their career in Dublin and lived in the city for eight years, said: "We are both big soccer fans. Growing up in Mexico City, we heard many stories about Pelé and the legendary Brazilian team that triumphed at the 1970 World Cup in our homeland.

"Imagine our surprise and delight to find out that not only is Pelé the greatest footballer of all time, but is also a very talented singer and songwriter? It is a huge honour for us to collaborate with Pelé on the occasion of his 80th Birthday."

The musical collaboration began when Rodrigo y Gabriela - fresh from their Grammy win for their latest album Mettavolution - were invited by fellow Mexican music producer Jorge Berlanga to contribute a song for a tribute to Hispanic composer Armando Manzanero.

On discovering that the duo is soccer-mad, Jorge mentioned that he was a good friend of Pelé, and suggested they work on a song together. 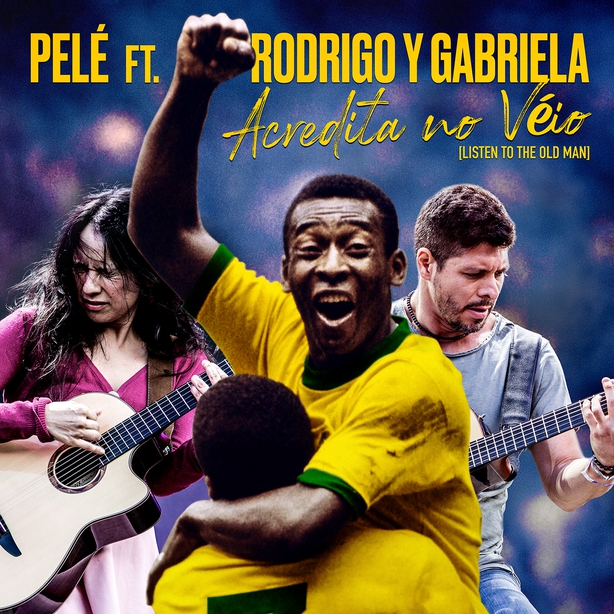 Acredita No Véio was originally written by Pelé in 2005 when he was working with his regular musical partner, the Brazilian jazz musician and arranger Ruria Duprat, best known for his work with visiting jazz stars Diana Krall, Randy Brecker and Ron Carter.

Speaking about the song, Pelé, who plans to celebrate his birthday at home with his family in Sao Paulo, says: "I wrote this one because when I used to play with Santos, the coach used to say that when we lost it was the players' fault, but when we won it was the macumba (black magic) that had helped. The song is joking about that - of course, macumba doesn't win games at all."