Ryan Tubridy has revealed the guests who will be joining him on the first Late Late Show of the new season on Friday on RTÉ One at 9:35pm.

Appearing on the show will be the Acting Chief Medical Officer, Dr Ronan Glynn; paddleboarders Ellen Glynn and Sara Feeney and the hero fishermen who saved them, Patrick and Morgan Oliver.

Dr Samar Fatima Ali will be in studio to discuss the devastating loss her family experienced this summer when her father, Dr Syed Waqqar Ali, a frontline doctor in the Mater Hospital, died after contracting Covid-19.

Mícheál Ó Muircheartaigh, Snow Patrol's Gary Lightbody, Women in Harmony and The Frank and Walters will also be among the guests.

"We're all giddy and excited and a little bit anxious about the return of the Late Late Show tomorrow night," the host told listeners to his RTÉ Radio 1 show on Thursday morning, in advance of the full line-up being announced . "We have a humdinger of a line-up for you; I think you're going to really like it, which is good news.

"So, I was in Croke Park last week for a very special reason, and the reason was our friends in Croke Park said, 'You can have the stadium, as long as you treat it respectfully'. We said, 'Yeah, because I want to interview somebody in the stand of the empty stadium'. And that somebody is Mícheál Ó Muircheartaigh, who celebrated a very significant birthday recently.

"Mícheál came along and he brought a couple of friends - two of his daughters and one of his sons. And we sat and spoke for half an hour. The interview won't last that long, but he's such a delightful human being, and a sage, and I think the country needs a sage these days."

"Also tomorrow night, Gary Lightbody of Snow Patrol will be on to kind of represent the Electric Picnic that wasn't," Tubridy continued.

"And we'll have the Women in Harmony, who had this big hit with Dreams, the Cranberries song. [They] will be joining us too, so that promises to be very beautiful."

"We have other guests, and other extraordinary stories tomorrow night," Tubridy added. "So put the kettle on, get the bottle in, have the popcorn on the side as well and join us, and we look forward to your company no end." 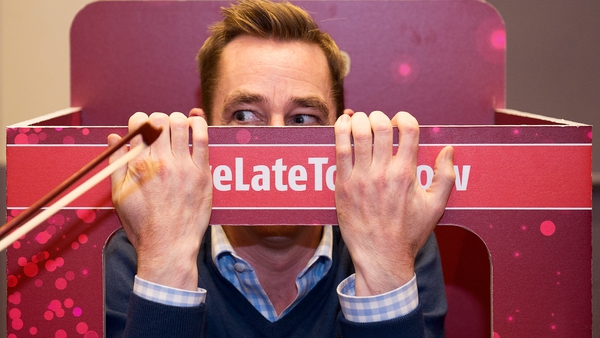