Sally Carman would be the first to admit that her Coronation Street character Abi Franklin’s had more ups in downs - but feels things have really turned the corner.

Abi seems to have settled down a little recently and got her life on track, and Sally reckons that her job situation has helped, along with a little TLC from Kevin Webster.

"Definitely having security in work and having somewhere to live and being in a relationship," she says. "Kevin has a huge part to play in that, he has given her emotional and financial stability so he is the main factor really.

"She has also made some nice friendships, particularly with Sally. On paper it is an unlikely friendship but Sally always likes to have a little project, not only has she found in Abi a project that is ongoing she has also found someone who is a really good friend and brings out other sides of her that perhaps no one else does.

"They went through something so intense being in prison together that there is a bond there now which is pretty much unbreakable and they adore each other. Sally mothers her a little bit but Abi brings out Sally’s more adventurous side."

Like anyone else - whether in the soap world or real life - what Abi needs more than anything else, is a significant other in their life.

But, as we all know, the course of true love never runs smooth. And that is as likely to apply to Abi as anyone else in Weatherfield.

Sally acknowledges that Kevin "is security, he is reliable, he makes her feel safe, there is a peacefulness that she is enjoying right now because she has never had it, but in my opinion that can’t last.

"The lack of excitement could be an issue and Kevin has bitten off more than he can chew with Abi. There is also an age gap which is exaserbated by the fact that she has never really grown up. Kevin is really at the point of his life where he wants to settle down and have a quieter life and she isn't going to bring that!"

Along with all that, Abi is also back on speaking terms with Seb, which Sally reckons is "all she has ever wanted and that is the reason she sorted her life out. She wanted to get her family back together to right the wrongs.

"She knows she gave the twins up for the right reasons, she feels she has given them that chance an opportunity that she couldn't give them, but it was too late for Seb, they have come too far together and she just needs to prove it to him that she can be a good mum and friend to him.

"She is delighted that they are now getting close again, this was her main objective and her goal."

Abi has also shown a more caring side in recent times.

Her reaction to Carla’s situation, for example, was very empathetic, and it’s a side of her character that Sally was pleased to see come to the fore in the show.

"Sometimes people can get tarred with labels like druggie and down and out but there is more to Abi than that, her turning to drugs or alcohol is to dumb down the pain she is feeling," she says. 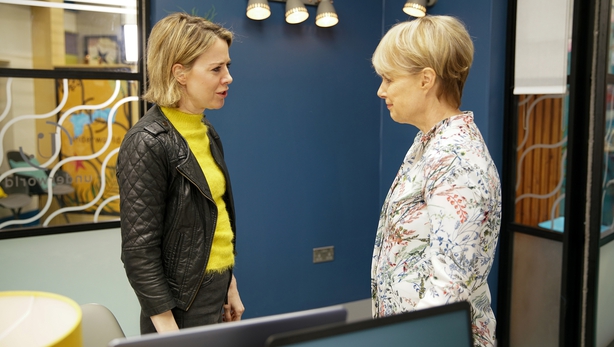 "She has got a massive heart, anyone that she sees as genuinely in distress she will help them as she recognises their pain and that is what happened with Carla."

As an actor, it’s very important to be able to buy into a role, and it’s clear that Sally enjoys playing Abi. When asked what she likes about playing someone like her, Sally points to her far from humdrum life.

"I love that she is flawed, she has been so unstable in life that she can have that range of looking as though she is sorted one minute, she can be funny and comedic and then devastated the next minute.

"You never quite know where she is going to be or what she will do next, and that gives so much scope for storyline. What I also love is that at the core of her she hasn’t got a bad bone in her body, she is impulsive, she doesn't think things through.

"She can be selfish, iIrresponsible she can be all these things but her heart is so good."

Putting all that together makes Abi quite a challenge as an actor - but would Sally think she could be friends with her?

"Absolutely not!" she insists. "She is too much like hard work, because of the kind of person she is to be a friend to Abi would take a huge commitment, because I would want to do it properly and I think that would be all consuming and to the detriment of other parts of my life."