Next year's Brit Awards have been pushed back by three months and are now set to take place in May 2021.

The annual ceremony, which is expected to mark its 41st year, usually takes place in February and has been held at London's O2 Arena since 2011.

Organisers took the decision after consulting with the music industry and their event partners over the effect of the coronavirus pandemic.

Geoff Taylor, chief executive of the Brit Awards and industry body BPI, said: "We want to make sure that The Brits delivers the outstanding production levels, superstar performances and live excitement that make it the biggest night in music.

"We believe that the best way to achieve this in 2021 is to move the show back a few months to May and we are already at work planning a spectacular event that will remind us how important music has been in getting us all through these difficult times.

"I would like to thank our labels, ITV, AEG and Mastercard and all our partners for their fantastic support."

The eligibility period for the awards will also be altered.

It comes as The Ivors, which celebrates songwriting and composing, announced it won't be holding a physical ceremony at Grosvenor House in London on September 2 this year. Winners will still be announced on that date.

The event was initially postponed from its traditional May date due to the pandemic. Last year's Best Contemporary Song winners were The 1975 (below). 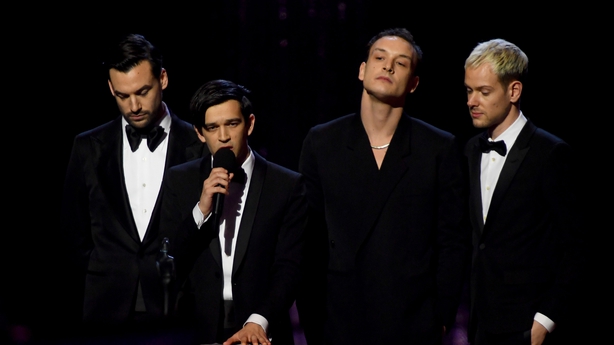 Ivors chief executive Graham Davies and chairman Crispin Hunt said: "As a community of music creators, The Ivors Academy has presented awards continuously for 64 years and 2020 will be no different.

"Lockdown proved how important music is to our lives and how fragile the live music industry is. Now, more than ever, songwriting and composing should be championed and celebrated to keep music alive.

"Our heartfelt thanks to Apple Music, PRS for Music and Grosvenor House London for their continued support."

Judging across all categories took place before lockdown and nominations will be announced on July 20.

The event is expected to return to London's Grosvenor House in May 2021 with a date to be announced soon.