EastEnders has ended on a cliffhanger as the hiatus of new episodes of the soap begins.

Filming of the popular drama was forced to stop in March due to the coronavirus crisis, and the pre-recorded episodes have run out before new ones have been made.

In the final moments of Tuesday's episode, it was revealed that Sharon Watts is set to become the new owner of The Queen Vic pub.

She secured a last-minute deal with Mick Carter that ensured the pub would not fall into the hands of Phil Mitchell.

Filming of the soap, which premiered on television screens in 1985, is set to resume at the end of June.

To plug the gap while the soap is off-air, Stacey Dooley is set to present a spin-off of the programme which will see cast members discuss the soap.

The spin-off will premiere on Monday June 22 as Dyer and Bright, who play Mick and Linda Carter, discuss their time on the soap. 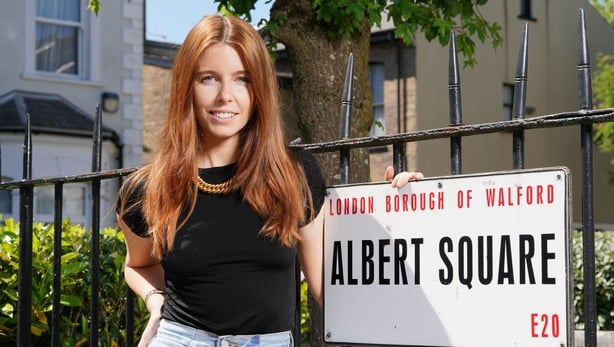 Bright will reveal a wardrobe malfunction, Dyer will show of his "doof doof" face and Dooley will be teased about another famous investigative journalist.

Bright said the show would feature "things I don't want people to know that I just blurted out".

We'll be back before you know it. And in the meantime, have a little watch of this. To be continued… #EastEnders 👋 pic.twitter.com/OuNYNnUy6R

Each week across five weeks, two cast members will appear on the show.

Original cast members Letitia Dean and Adam Woodyatt will be followed by James Bye and Davood Ghadami, then Max Bowden and Tony Clay.

Finally, there will be a socially-distanced reunion between Diane Parish and Tameka Empson.

More contributors for further weeks will be announced in due course.

Here's a sneaky peek at @MrDDyer and @kelliebright76 being reunited in Walford for the first time since Lockdown for a chat with @StaceyDooley. This is an episode you won't want to miss! Monday 22nd June, 8pm, @BBCOne. #SFTS #EastEnders pic.twitter.com/GzkAzcyAhk

Classic EastEnders episodes will also be aired to plug the gap.

The new instalments, to be filmed with social distancing, will be around 10 minutes shorter than the usual running time.

EastEnders: Secrets From The Square will premiere on Monday June 22 and continue weekly on Monday nights at 8pm on BBC One.