"Mostly, there's only one story with many dimensions," says news presenter and novelist Rachael English who has been presenting RTÉ Radio 1's Morning Ireland from her home, while also working, in between times, on a new work of fiction partly set in Ireland of the 1840s.

"Some mornings, the alarm goes off, and for a brief moment, everything feels normal. Then I remember that the world has changed, and that instead of going into RTÉ, I'll be presenting Morning Ireland from the dining room. By a quarter to five, I’m downstairs, the kettle is boiling, and the computer is firing up.
Before starting work, I usually step out into the front garden for a minute or two. Experience has taught me that the weeks between now and late July are the most precious of the year. The sun is rising, and the birds are tuning up.

"I’m conscious that I’m lucky to be able to work from home. The programme editor, sound operator and broadcast coordinator travel into RTE every day and do their jobs from behind sheets of plexi-glass. Two months on, it still seems miraculous that we’re able to put Morning Ireland on air with only the occasional glitch or miscommunication.

"Of course, I miss the buzz of the newsroom and being able to see the person I’m talking to, not to mention the other presenter, but in the grand scheme of things, these are minor complaints. In some ways, the nature of the programme has changed.

"Mostly, there’s only one story with many dimensions. Almost every day, I’m struck by the fact that the virus has been particularly cruel to those whose lives were already difficult: people living in overcrowded conditions or working in precarious jobs or separated from their families. 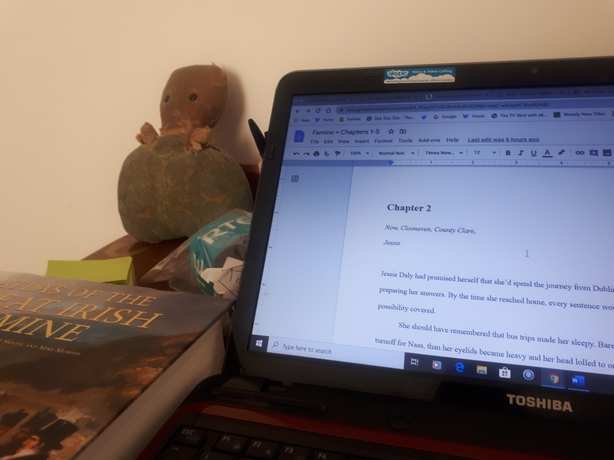 "Another thing that’s become clear is just how interconnected we are. All over the world, people are grappling with the same disease and the same problems. Last week, I spoke to Doreen McPaul, who’s the Attorney General of the Navajo Nation in the United States. She wanted to thank Irish people who’ve donated to their Covid-19 Emergency Fund as a reciprocal gesture for the money the Choctaw sent to Ireland during the Famine.

"It was only while we were talking that I learnt her brother-in-law, Jason, is from Newmarket-on-Fergus. I’m from Shannon, so we’re practically neighbours. We said hello on Twitter afterwards, and it was brilliant to see pictures of his children in Clare GAA jerseys.

"Eamon, my husband, is also a journalist, and he, too, has been working from home. When I finish Morning Ireland, I take away all my clutter, and he works at the same table. We’re a two-person news bureau.

"My latest novel, The Paper Bracelet, came out just before the restrictions started. Obviously, this publishing experience has been different from the others. The shops are closed, there are no book festivals or signings. Many Irish bookshops have been doing amazing work, taking deliveries over the phone and online and, in some cases, delivering the books themselves.

"In the early days of the virus, I didn’t write very much. My brain was flitting between the phone and the news, and I found it hard to focus on the words in front of me. Plus, I kept wondering what the world would be like by the time I reached the final chapter. Would everything I wrote seem irrelevant? Bit by bit, though, the rhythm has returned. What has helped is the fact that the book is partly set in the 1840s. Right now, writing about the past feels easier, even if that past is dark and disturbing.

"I’ve also been trying to educate myself. This means that when people ask what I’m reading, my answers aren’t of much help. For the best part of a fortnight, I was immersed in histories of the Kilrush workhouse and stories of life in west Clare before and during the Famine. As is usually the case, the more I read, the more I realised how little I know. (And, yes, by saying this much about a work in progress, I am effectively jinxing the book and ensuring it never gets published!)

"The past couple of months have deepened my addiction to audio books. In the main, I’ve been listening to recent American fiction. I enjoyed The Sweeney Sisters which is about three Irish-American sisters in Connecticut and what happens when they discover that the girl next door is also part of the family.

"I also liked Nothing More Dangerous which is set in small-town Missouri in the 1970s. But my absolute favourite has been Long Bright River by Liz Moore which tells the story of a Philadelphia policewoman and her sister who’s a heroin addict. It’s plotted like a thriller but is also moving and very powerful. Honestly, I can’t recommend it highly enough.

"Most days, I speak to my parents, Tony and Ruth. I haven’t seen them since the start of March, but I’m constantly amazed by how good-humoured they are about everything. Thankfully, they’ve been able to spend a lot of time in the garden. On fine days, they set out three chairs, with the most comfortable one being reserved for Grover, the cat.

"Like so many people, their lives have been made a little easier by the kindness of others. In particular, their neighbour, Helen Jones, has been absolutely brilliant. Thanks, Helen."

The Paper Bracelet is published by Hachette Ireland