Nicky Byrne took time when he phoned in to RTÉ Radio 1's Today with Seán O'Rourke to pay tribute to his wife Georgina for homeschooling their twin boys Rocco and Jay, saying: "I would've expelled them on the first day!"

The Westlife singer was on the show to talk about the song that's getting him through the Covid-19 emergency, but before he revealed his pick, he was asked about how he is getting on day to day, and the group's future plans.

"It's been a crazy, crazy time for everybody," Byrne said. "Our tour got postponed; we've rescheduled the Páirc Uí Chaoimh gigs for next year. Obviously the UK and Asia and China [touring] is not going to happen this year.

"But there's bigger problems out there and, actually, while I'm on, Seán, I'd like to take the opportunity to pay tribute to all of our frontliners and all the doctors and nurses because what a serious job they're doing at the moment. Bigger things, bigger worries in the world than a Westlife tour - we'll do it sometime."

"I need a haircut, Seán, there's no doubt about that," he laughed. "I'm growing a beard. We're quite lucky where we are, actually, in Malahide because within a 2km radius Malahide Castle is there and [we] go out for the walks and, I suppose, keep energised and exercised."

"Making coffee at home has been brilliant," he enthused. "I'm becoming a coffee connoisseur, enjoying that. I've planted flowers in the garden last week with Gia, my six-year-old daughter. We're trying to kill the time and Georgina has been brilliant with homeschooling the boys because I would've expelled them on the first day!"

When asked for his choice of song, Byrne replied: "I'm a big Coldplay fan. Now, my mam is listening, and she listens to you every day, and she would've liked me to go with The Beach Boys. But I had a conversation with her last night and I got it over the line to go with Coldplay.

"It's because I went to see them a couple of years ago in Manchester. They're colourful, they're brilliant and this song makes me smile.

"I want to dedicate it to everybody, but also to you, Seán, on your retirement. Well done you! From me and all your loyal listeners, this is for you. This is called a Sky Full of Stars." 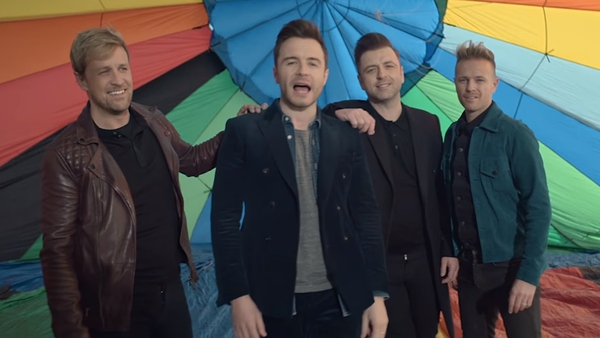