Paul McCartney, like the rest of us, may have had to adjust his habits in light of Covid-19, but he may be enjoying a spot of horse-riding, according to his website. One thing’s for sure - he’s certainly watching telly.

"Horse riding is one of my favourite ways to relax, " he says I n what was probably a then Covid-19 free zone, by way of reply to a fan's question on his official website.

According to Variety, the musician owns several properties in the US, including a Manhattan townhouse, a Beverly Hills estate, and homes in the Hamptons and Arizona, as well as several homes in the United Kingdom, including a gated residence in London and a farmhouse in East Sussex.

"I have a farm in the country where I love to ride. I have a horse called Moonstar, who is great. I've ridden him for years, so we know each other very well," he says.

"It's always a great relaxation to go out into the fields and the woods. I can go out for about two hours and trek around."

The musician describes his hideaway as  'a big farm with some fabulous trails’, many of which he made himself.

"It used to be my hobby when I had time on my hands. I would go out into the forest, take my Land Rover and then pull my chainsaw out and clear some paths, normally following animal paths like deer. Or some tracks had been made by forestry workers years before then had overgrown.

"So I’d make them into horse trails. Which is always very exciting when you've finished and you've joined one trail up to another. 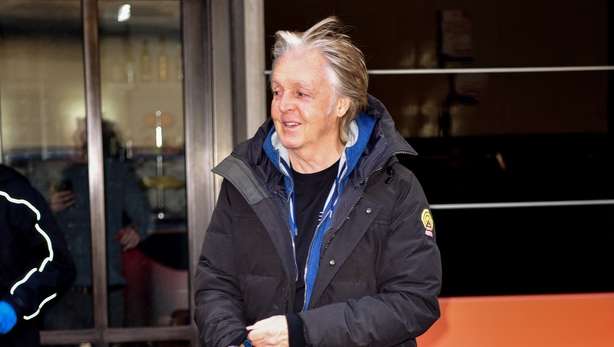 As for indoor pursuits, he describes himself as ‘a big TV watcher.’

"I know a lot of people watch series on iPads, I'm not so big into that. I prefer just easy television and Nancy makes fun of me for it. Nancy (Nancy Shevell, his wife who is 60) calls it the ‘Paul will watch anything department!' And she's right

He might even watch a shopping channel, which he says, is ‘boring’ for Nancy. "For me, I think it's kind of exciting. I end up watching the craziest programmes.

"I just switch around a lot and then get hooked. I end up watching something you wouldn't imagine I’d watch! I have to resist buying everything: ‘I need a can of that!’ DiDi Seven. There’s some stuff called DiDi Seven. It cleans everything! ‘I need some of that!’ Nancy will say, ‘...Are you sure?’

TV is relaxing, says the ex-Beatle.  "It’s nice to escape and sometimes a bit of easy TV is great. You don’t have to think about anything! You know, I've been thinking all day, either in the studio or in the office.

"So, I get home and just flop, turn the TV on, just flick around. I love things like Gogglebox. And some of the comedy shows like Would I Lie To You? All the British shows like that. They’re just such good programmes."