Metallica frontman James Hetfield has given fans an update following his recent stay in rehab, telling them "my therapy is going well" and that he now realises "my mental health comes first".

In a message posted on Instagram and emailed to the band's fans on Monday, Hetfield explained that Metallica would be unable to play previously announced festival dates in Columbus, Ohio and Louisville, Kentucky this year as his therapy continues.

"As part of my continuing effort to get and stay healthy, I have critical recovery events on those weekends that cannot be moved," he wrote. "I apologize to all of our fans who have bought tickets for these festivals. We are working with the festival promoters to provide for refunds or exchanges."

"My intent with this statement is saying 'I apologize' to each one of you," Hetfield continued.

"The reality is that I have not prioritized my health in the past year of touring and I now know that my mental health comes first. That might sound like a no-brainer for most of you but I didn't want to let the Metallica team/family down and, I alone, completely compromised myself."

"Looking on the brighter side, my therapy is going well. It was absolutely necessary for me to look after my mental, physical, and spiritual health," Hetfield added.

He told fans Metallica would play "all other announced 2020 shows".

"Beyond 2020, I am optimistic about the blessings I have been given and what the future brings," the singer-guitarist concluded.

"I appreciate all the great prayers and support from everyone since I went into rehab last September. Like the moth into the flame, being human in this career has its huge challenges and can be difficult. Your understanding helps the healing."

In September, Metallica postponed its tour of Australia and New Zealand as co-founder Hetfield received treatment. The band are due to go back on the road to play South American shows in April.

Last week, Hetfield performed live for the first time since rehab, joining the artists at a tribute concert to the late singer Eddie Money in aid of the USC [University of Southern California] Eddie Money Cancer Research Fund.

Hetfield was not on the bill for A Star-Studded Tribute to Eddie Money but performed Money's Baby Hold On at the show at the Saban Theater in Beverly Hills, California on Thursday, February 20. 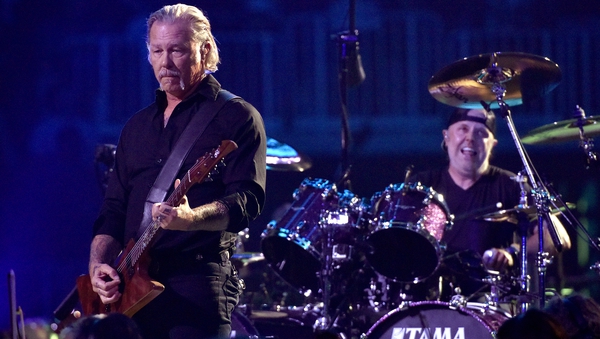