The 93-year-old actress, whose stint on the soap began back when the show started in 1985, said she has left the show "for good".

Her character had not featured since an episode last month, when Dot left a voicemail for Sonia Fowler, played by Natalie Cassidy, saying she had moved to Ireland.

"I've sent her off to Ireland and that's where she'll stay. I've left EastEnders. I did make up a limerick. It's a bit dirty.

"I went back to do a good story. Alas and alack, when I got back it had gone up in smoke.

"Well that is no joke. I got a small part, a very small part. And that ended up as a big wet fart. Alas and alack, I will never go back."

Brown is perhaps EastEnders' best-known star and played the larger-than-life Dot, known for her devout Christian faith and hypochondria. 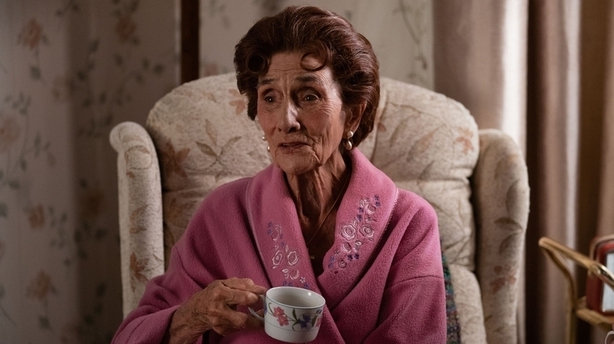 The veteran actress arrived on Albert Square shortly after the soap began in 1985, and aside from a break between 1993 and 1997, has been a regular since.

Some of Dot's biggest storylines have explored controversial issues such as euthanasia, cancer and homophobia.

During her podcast appearance, Brown said leaving EastEnders felt like a bereavement.

"I was feeling down a few days ago," she said. "I thought, 'What's the matter? Why do I feel so sad?' It's almost as if I've been bereaved.

"I've played two people simultaneously for 35 years. Really Dot wasn't me, but spiritually she probably was."

Brown won several awards for her portrayal of Dot, including a lifetime achievement honour at the 2005 British Soap Awards.

In 2009, she was nominated for the best actress prize at the TV Baftas.

An EastEnders spokesman said the "door remains open" for Brown to return.

A statement said: "We never discuss artists' contracts, however as far as EastEnders are concerned the door remains open for June, as it always has if the story arises and if June wishes to take part."