Lewis Capaldi was the big winner at the Brit Awards at London's O2 Arena on Tuesday night, winning Song of the Year and New Artist of the Year.

Another excellent reaction GIF supplied from @LewisCapaldi after winning Song of the Year 😅 #BRITs pic.twitter.com/WR94okxKt4

So many celeb BFF duos to be obsessed with, so little time! @LewisCapaldi @NiallOfficial #BRITs pic.twitter.com/IJKnrnez38

Capaldi joked onstage that some people thought his Song of the Year, Someone You Loved was about his ex-girlfriend, Love Island contestant Paige Turley.

He said: "A lot of people think it is about my ex-girlfriend, who you can now see every night on Love Island.

"It was actually about my grandmother, who sadly passed away a few years ago."

He added: "Thank you so much, this has been the best year of my life."

"I am so happy, man." Beyond proud of @stormzy and his Male Solo Artist win! ⚡️ #BRITs pic.twitter.com/SJ0AI2rDXX

🙌🙌🙌 Such a great reaction from @stormzy and his family and friends! #BRITs pic.twitter.com/5CYovCoGIu

Tyler, The Creator won the International Male Solo Artist gong. Irish singer-songwriter Dermot Kennedy had been nominated in the category.

After collecting his first-ever Brit Award, Tyler, The Creator jokingly thanked former British Prime Minister Theresa May, who he said had previously stopped him entering the country.

Mabel opened the show with a big production performance of her hit Don't Call Me Up.

Me: Maybe I'll give @Mabel a call, see what she's up to
Mabel: #BRITs pic.twitter.com/R2oGFXs89O

As she collected her Female Solo Artist award she saluted her mother, singer Neneh Cherry.

HUGE congrats to @Mabel, what an incredible moment! 😭 #BRITs pic.twitter.com/v0tJITVEph

💖"I want to start out by thanking my fans, I wouldn't be here without you guys today." The love between @Mabel and her fans is next level! #BRITs pic.twitter.com/7FhEhEEVsj

Host Jack Whitehall paid tribute to the late broadcaster Caroline Flack at the start of the show.

He described Flack as a "kind and vibrant person with an infectious sense of fun", adding: "She will be sorely missed. I'm sure I speak for everyone when I say that our thoughts are with her friends and family."

Whitehall then introduced Lewis Capaldi performing the Song of the Year, Someone You Loved.

Such a special performance of 'Someone You Loved' from @LewisCapaldi #BRITs pic.twitter.com/sc6trlAi4t

Harry Styles, who dated Flack at the start of his One Direction career, gave a very moving performance of his ballad Falling. He had earlier been photographed on the red carpet wearing a black ribbon on his lapel.

The show also saw Billie Eilish giving the first performance of the new Bond theme, No Time to Die; Lizzo singing a medley of her hits and Album of the Year winner Dave turning up the political heat with his track Black.

Chills for days after watching @billieeilish perform 'No Time To Die' #BRITs pic.twitter.com/7lW33D2Kb9

Stormzy may have won the award for performance of the night:

Every single person on that stage is living their best life rn. Shout out to @stormzy for yet another unforgettable performance 👏 #BRITs pic.twitter.com/KCMprZRzWE 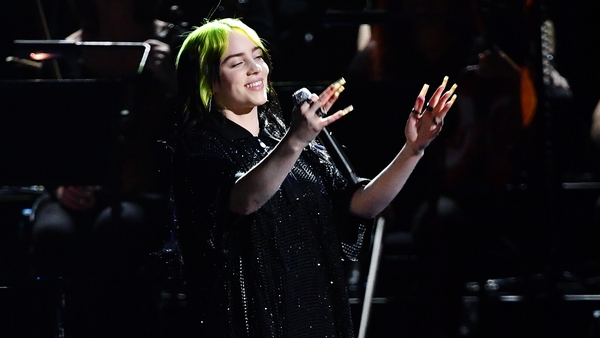 Her word is her Bond. Billie Eilish performs 007 song live for the first time at Brit Awards