Jim Carrey has said his body is so "black and blue from pinch-me moments" that he no longer has anything left on his bucket list.

The 58-year-old comedian and actor, best known for his roles in Dumb and Dumber and The Mask, will next be seen playing the villain Robotnik in the live action Sonic The Hedgehog movie.

"I can look at my life and literally from the neck down I'm black and blue from pinch-me moments, it's just incredible, this life I'm having, so I feel so gratified.

"I'm just happy when I'm able to play something or do something that is a new swing for me and, at the same time, the possibility of creating another character that kids dress up as on Halloween.

"One of the major, I will call it a bucket list thing, I had when I was younger, when I was dreaming up everything I wanted in the world, was that I would wish for the type of work that reintroduces itself to people, generation after generation.

"And I got that in spades. I just really lucked out and I feel super gratified about it." 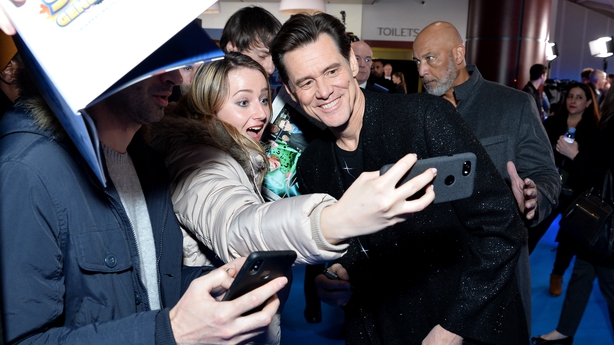 He added that he now takes pleasure in making films for his grandson, Jackson, adding: "And every kid, honestly every kid.

"One of the fantastic things in my life is I have people from a 10-year-old or an eight-year-old come up to me and their parents say 'Do you know who that is? That's the Grinch'. And they go 'The Grinch? It doesn't look like The Grinch!"'

Carrey said he responds to this by performing a line from the Doctor Seuss character, adding: "They just freak out, and so I get that 10-year-old now and also the 40-year- old who comes up to me and he goes 'I grew up with you man!'

"And somehow I'm still here and I'm trying with all my strength to defy the lethargy that is knocking on the door, 'Just give up, you've done enough, haven't you proven yourself?' No, no I haven't."

Sonic The Hedgehog is released in UK cinemas on February 14.