Former Love Island presenter Caroline Flack has said that she will "speak today" following reports that she and boyfriend Lewis Burton have split.

The 40-year-old TV presenter posted a message on her Instagram stories on Thursday morning hours after Burton had denied the split.

She wrote: "I'm going to speak today . . . . mine and my families life is no longer up for entertainment gossip."
Love Island star Flack is alleged to have assaulted former professional tennis player Burton, 27, at her flat in Islington, north London, in December. 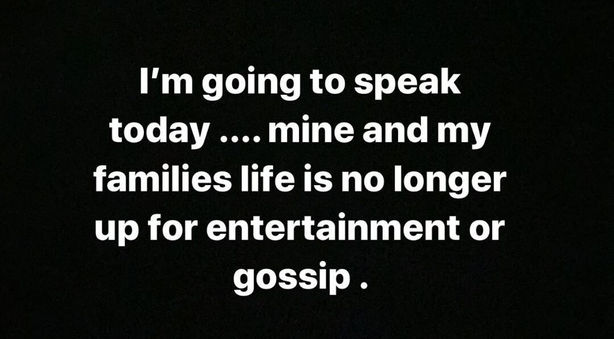 She entered a not guilty plea last month to the assault charge at Highbury Corner Magistrates' Court. She was released on bail with conditions that stop her having any contact with Burton ahead of a trial in March.

Flack allegedly hit Burton over the head with a lamp when he was asleep after believing he had been unfaithful.

Burton has previously spoken out in support of Flack, claiming she has become the subject of a witch hunt following her arrest. He does not support the prosecution and insists he is not a victim.

Following reports they had split, Burton took to Instagram on Wednesday night to issue a denial.

Alongside a photograph of them together he wrote: "We ain't split. Can't wait to see you."

Flack stepped down as the presenter of the current series of Love Island last month, saying in a statement that the show had been her "world for the last five years" and described it as the "best show on telly".

"In order to not detract attention from the upcoming series, I feel the best thing I can do is to stand down for series six," she said at the time.