Leanne Amaning has said it felt like "a kick in the teeth" when her ex Mike Boateng let her be dumped from Love Island.

The 22-year-old was sent packing during Wednesday night's episode, when she failed to get picked in the recoupling.

Leanne and Mike had been together since early in the series but split this week, and he chose to couple up with Sophie Piper rather than his former flame, meaning Leanne was dumped.

Mike and Leanne are officially over 💔 #LoveIsland pic.twitter.com/HL8anaLMYe

Speaking after her elimination, Leanne said: "Me and Mike, we didn't work. I feel he's justified in what he did by picking Sophie. That's a big thing to do - it's a bold move to make.

"But I feel like he's disregarded the two weeks we spent together and I feel like sending me home was a bit of a kick in the teeth, but it might also be my karma for dumping him...

"Beforehand, we had a good connection as friends, I would have thought he would have had that loyalty with me more.

"But he can crack on and I'm happy for him, I want him to be happy." 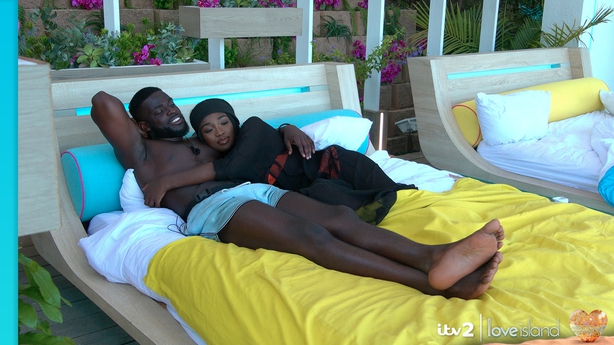 Discussing who was playing a game in the villa, she said: "Maybe Mike now... it'll be easier for him to crack on and do his thing without me there."

But she said there was "absolutely no way" he had a shot at romance with Sophie.

"I think they're just good friends and they're in a friendship couple," she said.

Leanne said she was "100 per cent" expecting to be eliminated.

"I just knew I was going home."

The customer service adviser said being on the show had been "a rollercoaster" and admitted it had its challenges.

"After you break up with someone, you don't normally live with the person," she said.

"The villa is a small place when you don't want to be around someone. It can make it awkward."

Leanne said she learned a lot from the experience, "so many things - the things I need to improve on, like patience," she said.

"Obviously being open. I feel like it's confirmed a lot for me. It was a huge learning curve. I'll miss that villa life."

Love Island continues on Virgin Media One and ITV on Thursday at 9pm.