U2 drummer Larry Mullen has led tributes from Irish musicians to RTÉ DJ Larry Gogan, who has passed away at the age of 85.

Mullen was a regular interviewee on Larry's 2fm show over the years and had built up a friendship with the much-loved DJ, who was well-known for supporting Irish artists, whether they were well-established or just starting off.

Larry Mullen said: "I woke up this morning with a knot in my stomach. Something just didn't feel right. I got out of bed and followed my usual routine...cup of tea, turn on my phone to look at the RTÉ news app...and there it was - Larry Gogan 1938-2020. It took me a while to process that. I thought of his children and grandchildren and then selfishly felt sorry for myself.

Our friendship was not traditional, as in - we didn't spend countless hours together...we didn't need to. Just a few interviews and the occasional long lunch.

We connected somehow. Maybe it was our shared north side credentials or most likely the constant messages back and forth through our mutual friend Paul Russell. Just checking in on each other or trying to set up the next lunch.

He added, "Larry's cultural obituary will be written by someone a lot cleverer than me.

"This is personal - not professional. And so to Larry..sadly we lost you today....but the next time I promise you Larry I'll come and find you on the other side. Larry."

"We are saddened to hear the news this morning of the passing of another legend, Larry Gogan. He was a great supporter of Irish music and will be sadly missed.

We met him so many times in RTE, when we were with EMI as his son David worked with us and he always encouraged us in our music.

We used to call him ONE SPIN LARRY as no matter what Irish band you were, Larry was always guaranteed to give you at least one play on 2FM.Our thoughts and condolences are with Larry's family. Rest in Peace Larry!"

Frances Black also thanked Larry for the role he played in her career:

I'm deeply saddened to hear of the passing of the great #LarryGogan, a wonderful man who was so instrumental in my career and was supportive of all Irish music, he was a pure gentleman and his wife Florrie was so lovely 🌻deepest condolences to his family and all who loved him🌹 pic.twitter.com/vSg3hlqY6E

The Coronas paid tribute to how the DJ championed young bands saying: Very sad news about Larry Gogan today. He was one of the first ever DJs to play us and always championed young Irish bands.

Very sad news about Larry Gogan today. He was one of the first ever DJs to play us and always championed young Irish bands.
A true legend#RIPLarry pic.twitter.com/VZpP91aQiD

Very sad to hear of Larry Gogans death. He was a wonderful champion of Irish music. Mine included. I'm glad I had the chance to thank him for all he did. My heartfelt condolences to his family. #ripLarryGogan 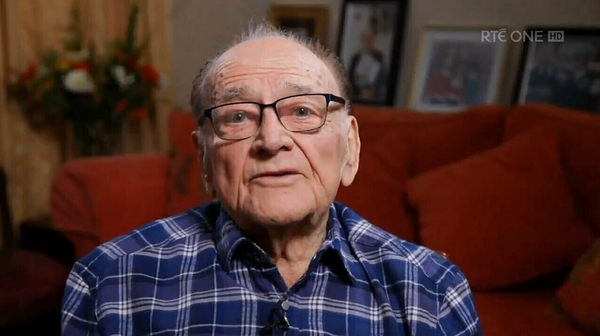