RTÉ has unwrapped its Christmas line-up with a feast of home-produced programming across television, radio and online.

Take a look at what's coming up below.

This Christmas, RTÉ pays tribute and remembers some of of the greats we have lost this year.

Brendan Grace Thanks for the Memories the Concert, a one-off special filmed at the Olympia Theatre, sees the Ireland’s show business community pay tribute to one of the greatest Irish entertainers of all time.

In Brendan Grace - A Late Late Tribute, we take look back at comedian Brendan Grace's most memorable moments down through the years as a guest on The Late Late Show on RTÉ One.

Following his recent passing, Niall Tóibín: Everyman is a celebration of Tóibín’s brilliant career and a look at his lasting legacy.

No Planet B: The Day We Took the Dáil is an observational documentary following three dynamic young Irish people who are passionate about climate change - and who are all on their way to Dáil Éireann to do something about it.

Leaving Limbo is the inspiring story of teenage best friends Natasha and Minahil – who grew up in Athlone as asylum seekers and are now navigating the tricky task of acing the Leaving Cert.

Back from the Brink, presented by Derek Mooney, demonstrates that with determination and passion we can start to turn things around, and re-build our fragile environment. And news2day will take a look back at the year in news which was dominated by climate action from school climate strikes to the RTÉ Youth Assembly on Climate.

The Big Christmas Rewind is a cracker of a show featuring Irish celebrities and their families sitting down together to rewind through a heart-warming and hilarious mix of the best of Irish Christmas telly from years gone by.

And as she hangs up her Nationwide hat, Mary Kennedy: as Seen on TV spools back through the archives and selects some memorable moments from her 40 year television career.

Once upon a Time at Christmas is RTEjr’s brand new panto for Christmas 2019. Join the Big Bad Wolf as he tries to show the world that he has changed his ways for good and is now the Big Good Wolf, along with a host of familiar RTEjr faces as they sing and dance their way to a happy ever after.

Ireland’s Rich List: 21st Century Hotshots is a two part series, presented by Richard Curran, which goes through the top 30 billionaires and millionaires who make up this year’s Sunday Times Rich List, revealing what it takes to join this exclusive club.

In the festive tradition, Mrs Brown’s Boys Christmas specials returns; Agnes’ world is turned upside down when an angel arrives in Finglas and grants her a wish to see what life would be like if she’d never been born.

And everyone in the Brown household is concerned at the news that the poisoner Peggy Piper has been released from prison, Winnie especially. KJevin Kennedy and Sue Vincent guest star in the show.

Music: The Best of Irish

The return of Irish music sensations Westlife in 2019 saw sold out performances in Croke Park and we bring viewers an hour long special of the summer concerts.

An hour-long Fair City special on Christmas Day has families coming together with the early return of Sash Bishop, heavily pregnant with Orla and Wayne's baby, and a lonely Ger shows up to Christmas dinner at the Collins', leaving Sharon horrified and Hayley caught in the middle.

The Christmas Letter is a new Irish animation based on the true story of a Christmas letter to Santa found in Terenure, Dublin decades later, with the voices of Catriona Balfe, Fiona Shaw.

And what would seasonal telly be without a feast of Christmas movies? Movie premieres include Beauty and the Beast, Paddington 2, Bridget Jones's Baby, Damo and Ivor – The Movie, Office Christmas Party, Storks, The Christmas Letter and Irish movie Float Like A Butterfly with Hazel Doube as a woman champion boxer.

Classic film crackers such as Willy Wonka and the Chocolate Factory, Santa Claus 2, Home Alone, Mrs. Doubtfire, Indiana Jones and Back to the Future will also feature over the festive season.

Rory O'Connell blends his unique cooking style and ingenuity to create some interesting Christmas recipes in a two-part seasonal special. In search of mouth-watering Irish Christmas food, Neven Maguire heads to Co Waterford while Donal Skehan offer tips and tricks to the holiday season in Super Food in Minutes.

The RTÉ Sport Awards 2019, presented by Darragh Maloney and Joanne Cantwell, is always a major event and will come live this year from Studio 4 in RTÉ.

One documentary to really watch out for is Shane Lowry - Open. Award-winning filmmaker Ross Whitaker (Katie, Anthony Foley - Munsterman) tell the remarkable tale behind the Offaly man's British Open win this summer while a radio documentary The Clara Jug: Four Days in Portrush will also tell the story.

There’ll also be live coverage of the FIFA Club World Cup, and four days of live racing from the Leopardstown Christmas Festival, while Second Captains return with a New Year’s Eve special, when the search for Ireland's Greatest Non-Sportsperson Sportsperson will continue.

Then you can party into the New Year with Tipperary star Una Healy and the RTÉ Concert Orchestra together with The Waterboys, David Gray, Wallis Bird, Brian Kennedy and many more special guests for what promises to be a truly magical night.

Following Una Healy's NYE Party, the NYE Countdown Concert from Custom House Quay in Dublin will begin for the spectacular midnight moment, and playing us into the New Year will be Walking on Cars.

Music fans can see the whole concert - which includes Ash, Aimee and Lisa McHugh - as it will be streamed live on the RTÉ Player.

Into the New Year, RTÉ will be unwrapping several new or returning shows in early January, including the latest runs of Dancing with the Stars, Operation Transformation, Tommy Tiernan, First Dates and One Day.

The new shows include Style Counsellors, Room to Improve: Dermot’s Home, How to be Good with Money, and All Walks of Life with Mary McAleese.

Christmas and New Year on Radio

Joe Duffy’s Liveline broadcasts from just off Dublin's Grafton Street on Christmas Eve, where he's joined by Brendan O’Carroll and others. Later, Derek Mooney will give callers the opportunity to talk to Santa Claus.

Baz Ashmawy and his mother Nancy present a Christmas Day celebration, while Miriam O’Callaghan is in full festive mode with an array of musical guests. The Leap of Faith presents Spirits of Christmas: Past, Present and Future, from Dickensian nostalgia to tales of our times and hopes for the years ahead.

Céilí House and South Wind Blows will mark the end of the year in the company of singer Niamh de Burca and music from Other Voices in Dingle. Joe Duffy presents a Leonard Cohen special called Cohen Heads, while Sean O’Rourke will have a selection of guests and musical entertainment as he reflects on 2019 and looks forward to the New Year.

John Creedon counts us into 2020 with great gusto and even better music on New Year’s Eve and then listeners can laugh away into 2020 with Oliver Callan.

Music fans are in for a treat as the 2FM Christmas Ball comes live from the 3Arena on December 21, with songs from Irish talent including Picture This, Lyra, The RTÉ Concert Orchestra, Aimee, Soulé and Brian Deady and a few more Christmas surprises.

The annual 2FM Christmas Quiz returns, while St Stephen’s Day concerts include Coldplay and Sam Fender. End the year with JJ Hartigan live from Limerick on New Year’s Eve, mixing the biggest tracks of the year along with all your New Year requests.

The Irish National Opera presents an effervescent take on the Cinderella story in Rossini’s La Cenerentola on Opera Night with Paul Herriott on December 28th.  Brendan Balfe presents a personal memoir of his friend and colleague Gay Byrne, Gaybo and Me, on December 29th.

On Christmas Eve, Cian Ó Cíobháin will bring his listeners a special Christmas edition of An Taobh Tuathail, #wrappersdelight, to get them in the seasonal spirit.

On Christmas day, tune in for Coinneal na Nollag - Fáilte agus Dóchas a concert featuring some of the best folk musicians in the west, including TG4 Singer of the Year Lillis Ó Laoire, and Galway choirs Cór Chois Fharraige and Cór Phobal Shíomóin.

Legendary trad singers and musicians Joe Heaney, Séamus Ennis and Seán 'ac Dhonncha will be the focus of the two part documentary series Bráithre an Cheoil on St. Stephen's Day and 27th December.  Kíla's Rossa Ó Snodaigh will be visiting four Gaelscoileanna in the northwest for his series Canúintí, starting on St Stephen's Day, and also starting that day is the ten-part series Saol agus Saothar Deichniúr Údar Gaeilge on the life and work of ten Irish-language authors.

On December 30 listeners can hear Sruth na Maoile @ 25, a gala concert recorded in glór in Ennis featuring top musicians from Scotland and Ireland including Karen Casey, Moya Brennan and Séamus Begley.On New Year's Day in Maidíneach Chnoc Mheilearaí, we'll hear an interview with one of only ten friars left from a community of 150 in Mount Melleray Abbey in Waterford.

Finally, in Ár bPéire on 3 January, we'll hear the story of how one couple created their family of four by adopting a little boy and girl, who were actually brother and sister but had never met.

You could also dip into something new like Chris O’Dowd’s State of the Union or the brand new box set of John Green’s Looking for Alaska, or keep the kids entertained with the likes of Peppa Pig, Fluffy Gardens, Bob the Builder, Nelly & Nora the Christmas Panto.

There are also RTÉ Player Originals such as comedy sketch series The Doireann Project, Converted and a festive short series called Christmas Crack-up where well-known faces get into the Christmas spirit.

If podcasts are more your thing, you're in for a treat with the 12 Pods of Christmas - a surprise daily helping of festive joy, including comedy sketches, music and top tips for surviving the season. 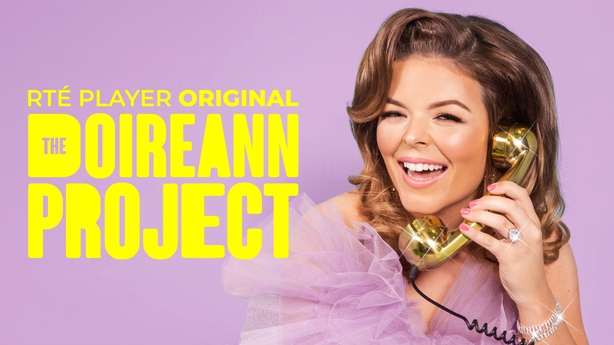