Vinnie Jones broke down in tears during his first TV appearance since the death of his wife Tanya, as he revealed how she told him not to grieve for her in a letter.

The 54-year-old footballer-turned-actor opened up about a letter his wife penned for him before she passed away in July aged 53.

Speaking to Good Morning Britain, Jones explained how he and their daughter Kaley found a letter from Tanya that said: "Don't grieve, I'll be waiting for you."

"And I believe that. I've got something to look forward to.

"If you turn a negative into a positive... and she's waiting, so, that's what you deal with. I think it's the best way to do it.

"My daughter's been strong, that letter has made my daughter very strong, she's now leading and taking up the reins," he said.

Thanks to my great old friend ⁦@VinnieJones65⁩ for the most stunningly powerful, emotional & inspiring interview imaginable.
None has ever moved me more, or sparked such extraordinary reaction. RIP Tanya. ⁦@GMB⁩ pic.twitter.com/AKWMG775VX

Of the letter, he added: "I got her card, it said, 'Vin, tomorrow something beautiful will happen,' and in it she wrote that, something beautiful always happens to her that she wakes up with me, and I think with me, as much as I was a bugger, she felt safe with me, I could deal with it, whatever problem."

In 2013, Jones revealed both he and Tanya had melanoma, the most serious type of skin cancer, and he was later given the all-clear.

Tanya had also been treated twice for cervical cancer and underwent a heart transplant at 21 following the birth of her daughter Kaley.

They discovered last Christmas Eve that the cancer had spread to her brain, but she pushed through the festive period while in pain for the benefit of friends and family.

"That's the first time we broke down together, and we were in the house and we had a lot of guests there," he said, of hearing her diagnosis.

"She didn't want to ruin their Christmas. So that was the worst time we ever broke down together."

"She wanted to get through the Christmas so they put her on steroids... It really puffs her out. She was unrecognisable, because she was a fantastically gorgeous woman.

"She went on the steroids to get through the Christmas... She was in and out of pain but got through it brilliantly." 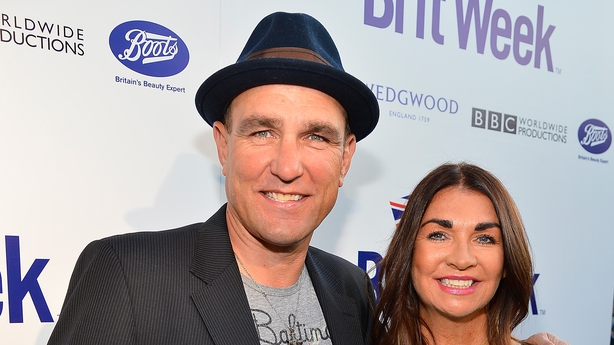 Jones was at Tanya's side when she died at their Los Angeles home in July.

The couple married in 1994. Tanya had Kaley by her former husband - who Jones later adopted - and a son, Aaron, with Jones.