The Game Of Thrones creators have told Japanese television that they are embarrassed about the coffee cup that was left in shot in the last series of the hit television show.

One of the programme makers David Benioff said:"We were concentrating so much on Daenerys and Jon Snow that we just didn't see this coffee cup right in the middle [of the shot]," he said.

The latte that appeared in the episode was a mistake. #Daenerys had ordered an herbal tea. pic.twitter.com/ypowxGgQRl

"At first I couldn’t believe it and then it was embarrassment, because how did we not see this coffee cup in the middle of the shot? Eventually, it was just kind of funny. Because this one is just a mistake and it’s just kind of funny to us now."

He said: "In Persian rugs, it's tradition that you make a little mistake when making the rug, because only God can do anything perfect."

His co-writer DB Weiss joked: "That’s why I put the coffee cup there. It was a conscious, concerted statement of our imperfection."

Since the programme aired, the US broadcaster HBO digitally removed the coffee cup from the streamed version on HBO Go. 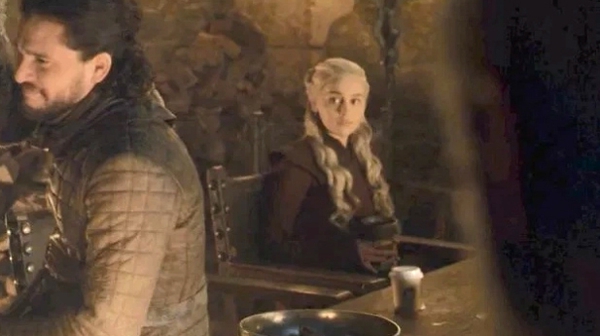 HBO dry roasts itself over Game of Thrones coffee cup