Actor and comedian Jon Kenny plays up to ten different characters in one-man play Crowman and he says the experience has taught him a lot about himself.

Written by producer and writer Katie Holly, the play won rave reviews when it was first staged and it makes its return for a run at Dublin's Olympia Theatre this September. Crowman sees Kenny portray Dan Lonegan, a fifty-something bachelor living in isolation in rural Ireland, telling stories about the many characters in his life and looking back on a love story that never was.

Speaking to RTÉ Entertainment, 61-year-old Limerick native Kenny, who was one half of comedy duo D’Unbelievables with Pat Shortt, said, "There is a bit of me in it because I can relate to Dan’s story a lot. There are some similarities and whether Katie thought of that when she was writing it, she wrote it with me in mind, I'm not sure.

Kenny added, "I find new things in it every night. Maybe I played it different from the previous night or the week before. I’m always changing things and it mightn’t be the dialogue but the way you approach it or the way you think about it and then you start to redefine it again. 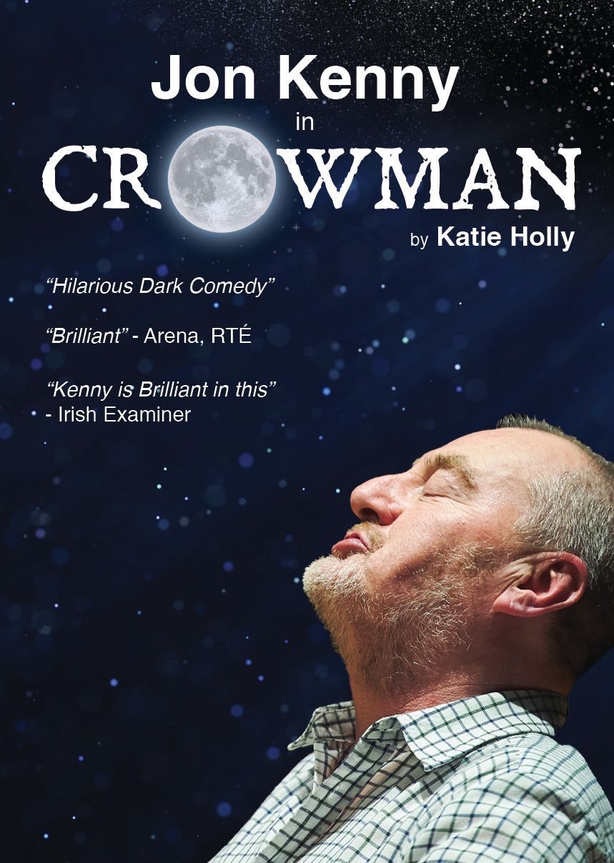 "As a friend of mine said to me a while back, there’s a bit of Dan in all of us. We all want to belong. It’s a human story and Katie captured that."

Kenny says he still struggles to describe what Crowman, which swings from humour to sadness and back again as his monologue unfolds, is actually about.

"What is it? What is this thing about?" he says. "Even when I’m in the middle of it myself and I’ve lived with it, sometimes you’re so close to it you can’t even see it . . .

"I was down in west Cork last week performing it every night and it occurred to me that the play is about belonging and it’s about difference, the feeling of being different and people finding difference in other people but everyone is different and we’re entitled to be different and the play explores that in its own way without slapping you in the face with it."

The deep-thinking and rather actorly Kenny is full of praise for Katie Holly, who not only wrote the piece but directs and looks after the music too. "There is an honesty that comes out of it. It was just the two of us sitting down and talking about it and that honesty is vital if you want to make something work," he says.

"You just have to be honest with the piece and we trusted one another that we’d get the best out of it. That was great because it’s not often that an actor get a chance to work with the writer so closely. We were pretty much on our own. No middle men."

"I find new things in it every night. Maybe I played it different from the previous night or the week before. I'm always changing things and it mightn’t be the dialogue but the way you approach it or the way you think about it and then you start to redefine it again."

With only an unseen dog for company, Dan relates stories of local feuds and the kind of idiosyncratic characters Kenny himself probably knew of growing up in rural Limerick.

Asked to name all the characters he plays in Crowman, he has to stop and think. "Well, there’s Peggy, Nelly, mam, dad, the priest, a doctor, Sheila and her husband John . . . I don’t make a big deal out of it in a sense.

"When I move in and out of character, there’s a slight movement and a slight change of voice. I’m careful not to over dramatise them because then I sound like a mimic and I don’t want to be a mimic. What I’m doing is telling a story. It’s keeping a balance and finding a narrative."

Forget about dive bombing seagulls snatching your ice cream or chips - in the play, Dan has a deep-rooted hatred of crows, the reason for which emerges as the night draws in.

As for Kenny’s own views on those oft-maligned birds . . . "Oh, I think they’re incredible. They're very intelligent and they’re supposed to be sign of luck where I come from. Some people hate them for no reason. Crowman started out like that. There is a story line in the play that is very touching to Dan.

"He is a nature lover and I don’t think he really hates crows but in the play, things unfold and you suddenly realise there are things inside he’s carrying with him. There is a reason and it comes out when he hears about a friend of his who has passed away. That’s the crux of the whole play."

Crowman is at the Olympia Theatre, Dublin on September 4th, 5th and 7th