The first photos of Saoirse Ronan in the upcoming adaptation of Louisa May Alcott's classic sibling coming-of-age-story Little Women have been released.

Speaking to Vanity Fair last month, Ronan shared her joy at getting to break Chalamet's heart in Little Women.

Ronan said of reuniting with Chalamet onscreen, "I loved that in Lady Bird, he was the one that broke my heart, but I got to break his heart in Little Women."

The Irish star, who grew up as an only child, singled out another positive factor to shooting the film: "I got to have sisters."

Writer-director Gerwig said her film will explore a "different kind of gendered relationship".

She said: "Jo is a girl with a boy's name, Laurie is a boy with a girl's name. In some ways they are each other's twins.

"They find each other before they've committed to a gender. It wouldn't be wrong to call Saoirse handsome and Timothée beautiful.

"Both have a slightly androgynous quality that makes them perfect for these characters."

Gerwig said of working with Ronan again: "I'm so blessed to work with [Saoirse] twice. She's such a filmmaker as an actor. She's like a barometer of... that truth that rings true."

Ronan added of Gerwig: "In the truest sense of the word, I just idolise her." 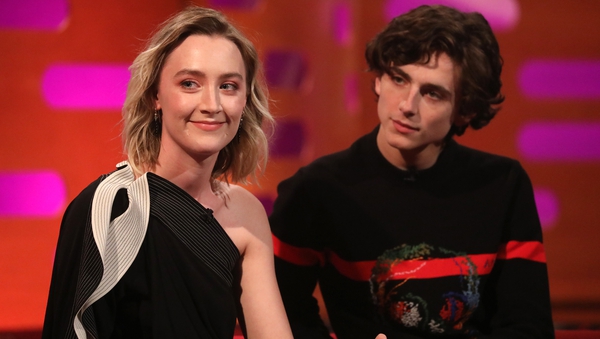