Strictly Come Dancing professional AJ Pritchard has defended his brother, Love Island contestant Curtis Pritchard, after he was criticised for telling his Love Island partner Amy Hart that he had been having doubts about their relationship.

Speaking on ITV's Lorraine on Thursday, AJ Pritchard said that his brother - a professional dancer on RTÉ's Dancing with the Stars - "wears his heart on his sleeve".

What's @Aj11Ace's advice for little brother, Curtis? 'Go and talk to Amy and say exactly how you feel.'

Do you think Curtis and Amy's relationship can be saved? #LoveIsland #Lorraine pic.twitter.com/TMnEaVQlLA

"He's so honest, he literally can't lie and that's sometimes his downfall, because sometimes I feel like, 'Curtis just say it this way and it may come across nicer than the way you've said it'," AJ Pritchard continued.

"But the thing is, it's important, with Amy and Curtis now... The other girls are blocking Amy and they don't want Curtis to come in and talk, whereas, I tweeted last night, 'Curt, no, just go [and talk to Amy]'.

"My advice, not that he can hear me, was just go and talk to Amy and say exactly how you feel," AJ Pritchard added.

"It's been portrayed that he's kind of cheated on her... Yes, he kissed another girl but that was in a task. He still slept outside with Tommy [Fury, fellow contestant] in the bed and nothing happened regarding outside.

"In any relationship you go through these different stages, and Amy's never been in that relationship before and I feel like she does have to trust in Curtis. I know it is hard, but from the outside we don't always see what's happening inside the villa."

When asked what he would say to his brother if he could "parachute in there", AJ Pritchard replied: "Stick to what you're doing. Stick to your heart." 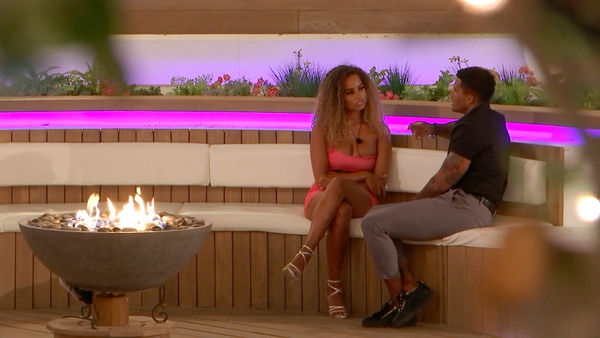 Amber feels green and then sees red on Love Island