Tributes have been pouring in for Fair City actor Tom Jordan following the announcement of his death, with the late star hailed as "the heart of Fair City."

It was announced on Saturday that the actor, who was best known for playing Charlie Kelly on the long-running RTÉ soap, had died. He was in his 80s.

"Tom Jordan was the heart of Fair City," she said in a statement.

"He played Charlie Kelly from the very first episode and was a huge part of our plans for the future.

"A consummate actor, and a strong advocate for his colleagues across the industry, he will remain a legend for the viewers and for everyone who had the privilege of working with him. Our thoughts are with his family at this very sad time."

Jim Bartley, who plays Bella Doyle, said Jordan was "one of the best friends I've had in the business."

"I've known Tom for 40 years, and he was a big part of my life. Myself and Tom shared a dressing room in Fair City for nearly 30 of those years, since 1990 and they were a great 30 years," Bartley said.

"We'd discuss everything from the meaning of life to the profession we work in together over a pint, and he was one of the best friends I've had in the business.

"I'm going to miss him, and his Fair City family will miss him. He was such a steady part of the show, and he gave Charlie such credibility and life. My thoughts are with his wife and family."

George Mahon, who plays Mondo, remembered Jordan as "an incredible actor and mentor."

RIP Tom Jordan. An incredible actor and mentor. My thoughts are with his family. pic.twitter.com/Fe4qmjb6TZ

#TomJordan was nothing but kind, patient and brilliant. I began playing his grandson aged 4 and loved every minute of the following ~12 years. He was a teacher, friend and also loved joking around. Devastated to hear he has passed away, I am so thankful to have known him. #RIP

"Tom Jordan was nothing but kind, patient and brilliant," Kenny tweeted.

"I began playing his grandson aged 4 and loved every minute of the following ~12 years. He was a teacher, friend and also loved joking around. Devastated to hear he has passed away, I am so thankful to have known him. #RIP"

Kerri-Ann actress Jenny Dixon said it was "an honour" to work with him.

So very very sad to hear of Tom Jordan 's passing. A wise mentor both on & off set. A pillar of strength. Was an honour to work alongside you. My thoughts & prayers to him & his family ✨ #TomJordan pic.twitter.com/OgecCoUf3P

Former Fair City star Clelia Murphy, who played Niamh on the soap, described Jordan as "a true pro" and a "tireless campaigner for actors rights."

So sad to hear of the passing of my lovely colleague #TomJordan.

We presented an award together at the IFTAS in 2014. The gentlest, loveliest man who believed in respect & justice for all. One of life's good souls.

Very sad to hear of the passing of Tom Jordan. Always a gentleman to work with and a wonderful actor. My condolences to his family and friends. May he R.I.P pic.twitter.com/lFUGfc8EiR

Ah I'm very sorry to hear this. Tom was always a gentleman to me & would always say hello. Sad that the iconic Carrigstown couple Mags & Charlie are both gone now. RIP @faircityfans @RTEFairCity https://t.co/9iPruAT6gW

Sending deepest condolences to the family of Actor #TomJordan who Played Charlie Kelly in @RTEFairCity who sadly passed away! A pleasure to meet Him over the years while working in the much loved Irish Soap! @faircityfans #FairCity ❤ https://t.co/GUJ5ez5AI2

So sorry to hear Tom Jordan has died aka Charlie Kelly. Great actor. His character of Charlie will be missed.

Devastated to hear the sad news that our friend and colleague Tom Jordan has passed away. He will be sadly missed by all in Carrigstown. RIP Tom https://t.co/G009acm1WV

Veteran Fair City star Tom Jordan dies https://t.co/p5DoMU3G7k - I'm so sad to hear this news, what a huge loss to the #faircity family. Thoughts going out to his Family & friends. Rest in Peace Tom. 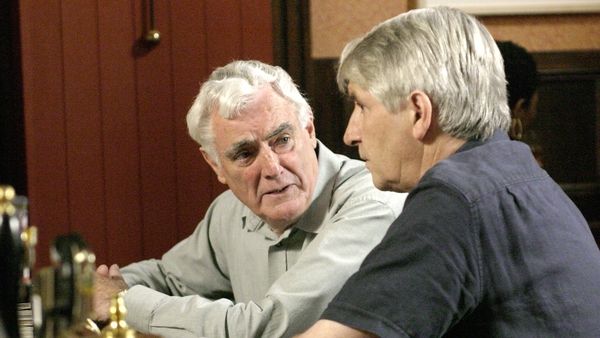