President Michael D Higgins has led tributes to Philomena Lynott, the mother of Thin Lizzy's Phil Lynott, who has died at the age of 88.

She passed away on Wednesday morning, Hot Press magazine has confirmed, after battling cancer for the past number of years.

President Higgins said he had learned of Philomena Lynott's death "with great sadness".

"Meeting Philomena Lynott I was struck by her sense of humour, and the resilience which she summoned and on which she had to call many times in seeking to overcome the difficulties in her life," he continued.

"She is owed a debt of gratitude for her unstinting campaign to keep Phil Lynott's legacy foremost in the public mind, and for her prominent role in public advocacy campaigns, including for the rights of members of the LGBT community and against drug use.

"It was a privilege to have met Philomena and to share parts of her life's journey."

Philomena was the author of the best-selling memoir My Boy, which told the story of Phil Lynott's life from his upbringing in Manchester and Dublin, to his success as the frontman of Thin Lizzy.

"She was a formidable and brilliant woman," Hot Press editor Niall Stokes said. "I am really proud that we were able to participate in telling her remarkable story. Because she was indeed a remarkable woman.

"She was hugely determined and courageous – and absolutely committed to the campaign to ensure that Philip's memory was kept alive and his legacy celebrated."

Philomena came to national prominence when she published her book, which was written with Jackie Hayden. My Boy was a No1 bestseller on two occasions and told her extraordinary life story.

She departed Dublin to work in England after leaving school, but her plans were forever changed when she became pregnant with Phil, whose father was Cecil Parris, from Guyana.

Phil came to Dublin while still a young boy and went on to become one of Ireland's most revered songwriters and musicians.

It was one of the great joys of Philomena's life that she succeeded in her campaign to have a statue of her son erected in Dublin. 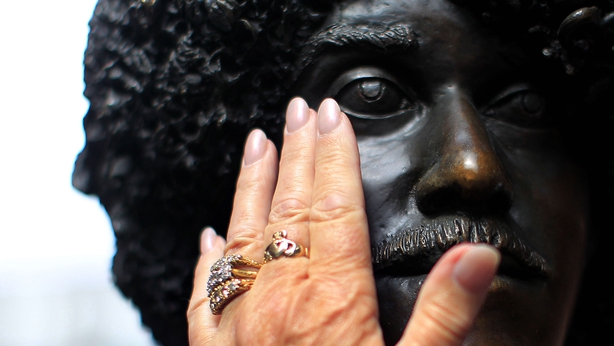 The statue is located on Harry Street, just off Dublin's Grafton Street.

There have been many tributes on social media:

RIP Philomena Lynott, as much an Irish legend as her son 💙

One of my favourite interviews I had while doing the talk show for Phantom FM was with #PhilomenaLynott - so courageous and honest such sad news pic.twitter.com/KeocYxvlEm

So sorry to hear of the passing of Philomena Lynott. I had the pleasure of meeting the great woman on a couple of occasions I was understandably very nervous,but her grace and kind words were lovely and inspirational. The unconditional love she had for her son was beautiful.

Rest In Peace, Philomena Lynott.
Philomena was so kind to us. She welcomed us into her home and loved that we loved her son. She could also hang with the hardest of them.
Easily the coolest person in rock and roll.
Thin Lizzy forever. #PhilomenaLynott pic.twitter.com/GH7v1IYVaF

I only once fleetingly met #PhilomenaLynott but when I worked in @FM104 answering the phones on @AdrianFKennedy’s show I have a vivid memory of her ringing one night to express appreciation for an item about him and how it kept his memory alive. May they meet on the other side