There was disappointment for Ireland's Eurovision Song Contest hopeful Sarah McTernan in Tel Aviv on Thursday night when she failed to make it past the second semi-final knock-out round to Saturday's grand final.

Here are the 10 songs that qualified in the second Semi-Final and will perform at the Grand Final on Saturday!

The 25-year-old from Scariff in Co. Clare was the second act on stage, performing her song 22 but a nail-biting public vote did not place her among the ten winners.

Speaking in her dressing room about her performance, an emotional McTernan said: "I felt really happy in myself. I wanted to be able to look back and be happy and be comfortable with the performance myself so you know what, I was happy.

"All the team worked so hard and they’re absolutely incredible and things don’t always go your way but we’re looking on the bright side."

She added, "Tonight I’m going to meet up with family and friends who have come over. We’re just going to have a few celebratory drinks because to be honest, we put a lot of work in and we’re all happy with what we’ve done.

"I’d like to thank everyone back in Clare. Honestly, it means so much to me. To everyone and all the posters and everything. It’s given me so much energy on stage."

Michael Kealy, head of Ireland's delegation, praised McTernan's performance, noting how tough the competition was in her semi-final.

"Unfortunately we had a very strong semi-final, much stronger than semi-final one."

He added, "It's a tough competition; it's not as easy as it once was."

"She has a magnetic personality that when she enters a room she really lights the place up, and every other act here when they were being asked about who they would miss most when the competition is over, they all said Sarah," he said. 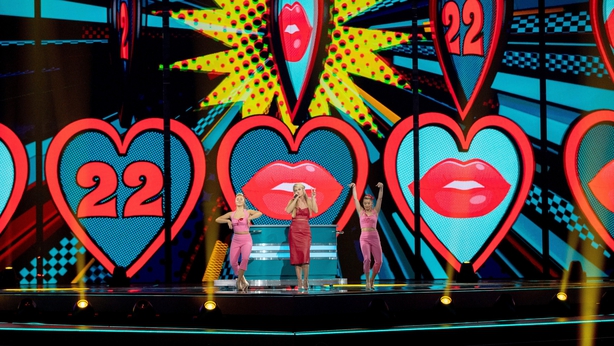 The "big five" countries, the UK, France, Germany, Italy and Spain, are already assured of a place in the grand final.

McTernan took to the stage to perform her upbeat pop song at the Expo Tel Aviv venue in a set modeled on a fifties diner, flanked by two backing singers dressed in pink.

She was hoping to change seven-time Eurovsion winners Ireland's recent fortunes in the contest.

Ireland is a longstanding participant, appearing 52 times, but has not won since 1996 with Eimear Quinn's The Voice.

"I’d like to thank everyone back in Clare. Honestly, it means so much to me. To everyone and all the posters and everything. It’s given me so much energy on stage." - Sarah McTernan

Moldova's Anna Odobescu impressed with a rousing rendition of Stay before the night's first favourite made his Eurovision debut.

Switzerland's Luca Hanni received the loudest cheer on Thursday night with his club-ready pop song She Got Me, in front of a red backdrop and crimson strobes.

Thursday night's show features a number of favourites to win, including Sweden's John Lundvik and the Netherlands' Duncan Laurence.