Tributes have been paid to actor Luke Perry who died yesterday after suffering a stroke.

He was most recently working on teen drama Riverdale but is best known for playing heart throb Dylan McKay on Beverly Hills, 90210 in the 1990s.

Former cast members from the hit show have been sharing their memories of the late actor.

Speaking to People magazine, she said: "I am in shock. Heartbroken. Devastated by the loss of my friend. I have so many memories with Luke that make me smile and that are forever imprinted on my heart and mind.

"Luke was a smart, quiet, humble and complex man with a heart of gold and never-ending well of integrity and love. Luke reached out to me during my cancer journey and we picked right back up, albeit older and wiser, but that connection remained intact."

She continued: "There is a special kind of love one has for each other when you are experiencing the journey we did on 90210 and, of course, life in general.

"Luke and I were working on show ideas for us. We wanted to work with each other again and create something special and meaningful for our fans at this stage in our lives.

"I will miss him everyday. Every minute. Every second."

Ian Ziering, who played Steve Sanders on the series, said he will "forever bask in the loving memories we've shared over the last thirty years".

Dearest Luke,
I will forever bask in the loving memories we've shared over the last thirty years. May your journey forward be enriched by the  magnificent souls who have passed before you, just like you have done here, for those you leave behind.

Gabrielle Carteris, who played Andrea Zuckerman on the teen drama, said she is "so heartbroken" over Perry's death.

Dearest Luke- I am so heart broken and at a loss for words. You my friend were a mighty soul and have left your mark. My love and prayers to the family and all who loved you. RIP

Last week, the cast posted on social media about how excited they were to reunite on a planned reboot of Beverly Hills 90210 this summer.

This Summer... so excited to be working with all these good people again! 90210onfox foxtv #90210onFox https://t.co/j0PGVtZXkR

As well as Beverly Hills, 90210, Perry was known for starring in teen drama Riverdale. According to reports in the US, the Netflix show has stopped production following his death.

Perry's Riverdale co-stars were among those to pay tribute.

Lili Reinhart, 22, tweeted said: "I'm finding it hard to grasp that he will no longer be around to give long hugs and share his wisdom and kindness with all of us. I'm thinking of his family. His children. I pray for them to heal and find peace in this devastating loss."

Reinhart, who plays the character of Betty Cooper in Riverdale, added: "I just can't believe it."

I’m finding it hard to grasp that he will no longer be around to give long hugs and share his wisdom and kindness with all of us.

I’m thinking of his family. His children.

I pray for them to heal and find peace in this devastating loss.

A statement from Riverdale’s executive producers, Warner Bros., and The CW. pic.twitter.com/1YNhbaupHv

Luke Perry... you were a joyful and vibrant soul. You will be missed but most certainly your legacy will be remembered forever. Rest in love and peace, friend. #Riverdale

Meanwhile, Perry had recently finished shooting a role in Quentin Tarantino's Once Upon A Time In Hollywood.

The film is rumoured to premiere at the Cannes Film Festival in May.

His co-star Leonardo Di Caprio said on Twitter: "Luke Perry was a kindhearted and incredibly talented artist. It was an honor to be able to work with him. My thoughts and prayers go out to him and his loved ones."

Luke Perry was a kindhearted and incredibly talented artist. It was an honor to be able to work with him. My thoughts and prayers go out to him and his loved ones.

According to his publicist, Arnold Robinson, Perry was surrounded by his family when he died, including his children Jack and Sophie, fiancee Wendy Madison Bauer, ex-wife Minnie Sharp, mother Ann Bennett, step-father Steve Bennett, and his siblings, Tom Perry and Amy Coder.

Other stars also paid their respects.

My heart is broken. I will miss you so much Luke Perry.  Sending all my love to your family. ❤️ #LukePerry

My mom loved #LukePerry We all did. He lived at our house when he got cast in 90210 - He was a real farm kid. He could fix anything. Had a pet mini pig before anyone did. This is a picture of us at Alexis Bday Kareoke Party. He got me on #BuffyTheVampireSlayer Thank you brother pic.twitter.com/aVOcY06gNQ 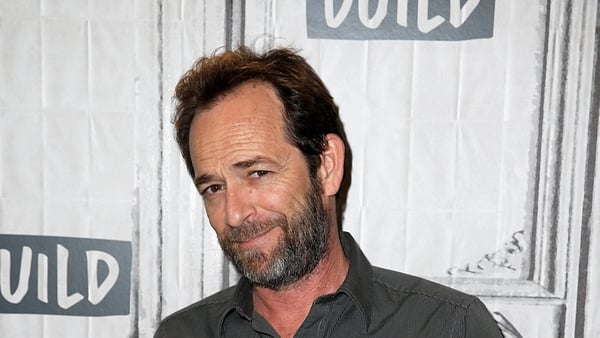