Presenter and entrepreneur Darren Kennedy and his professional dance partner Karen Byrne have become the third couple to be eliminated on Dancing with the Stars.

Darren and reigning champion Karen had earned 18 points from the judges on Sunday night for their Salsa, but they did not receive enough votes from the public to stay in the RTÉ One competition.

After the result had been announced, Darren said the show had been "an amazing journey".

"I've done something I never thought I would do," he continued.

"It's been so much fun. Tomorrow, it's back to business with Kennedy and Co, selling grooming products! And I'm booking a holiday! That's what I'm doing! Karen's coming with me!"

"I get it," he said. "But, do you know what? I just think to come out and to learn a skill - we threw ourselves into that as a full-time job. And it was amazing."

Darren also paid tribute to the "great group of people" he had met on the series.

Professional partner Karen said she had "so much fun" dancing with him.

"I've never met somebody that could talk as much as me - or eat as much as me!" she told presenters Jennifer Zamparelli and Nicky Byrne. "So I couldn't have asked for a nicer partner."

Addressing Darren, she added: "Obviously, the journey has ended - I think too soon for you.

"I think you just brighten up the whole set and everybody loves you here."

Dancing with the Stars continues next Sunday on RTÉ One at 6:30pm, when the celebrities will have new partners for Switch Up Week.

It was Week Five, and the celebrities performed routines inspired by some of the most memorable years of their lives. We were with them every step of the way.

Presenter Mairéad Ronan celebrated 2007, the year she became a mother. Together with partner John Nolan she performed a Contemporary routine to Take That's Rule the World for the top score of the night, 25.

Judge Brian Redmond said the first Contemporary Ballroom of the season had been "elegant and beautiful". "I loved it," he concluded.

Judge Loraine Barry said Mairéad had triumphed with the physical challenge of the dance. "There was so much light and shade here," she continued. "You blew me away." 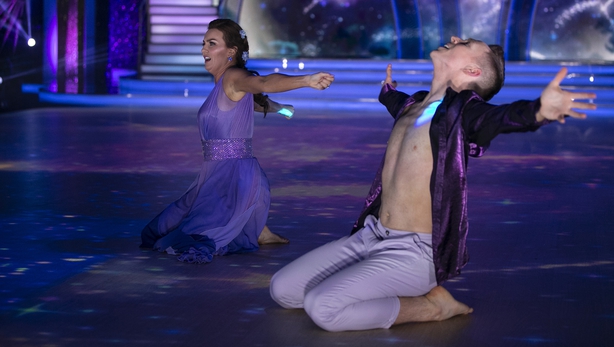 Judge Julian Benson said Mairéad "ruled the dancefloor tonight". He described her partnership with John as "perfect". "This was the best dance of the night for me," he added.

For her American Smooth with partner Robert Rowiński, singer Cliona Hagan chose the year 1999 - "the year I found my voice". Their routine to Shania Twain's Man! I Feel Like a Woman earned them a score of 22.

Judge Julian said it was "one sexy American Smooth".

Judge Brian wanted Cliona to watch her lines, but also said she was "very good in hold". 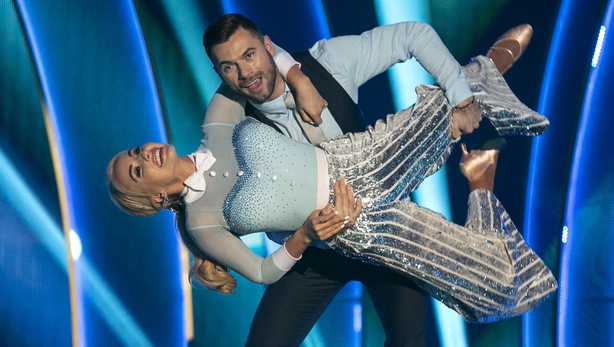 Judge Loraine said the start was "really, really smooth", but said there was difficulty in the positioning. "Overall, I thought it was gorgeous," she added.

Actor Johnny Ward and his professional partner Emily Barker's chosen year was 1998, when Ward realised he "wanted to become a showman" and joined a Boyzone tribute act. They danced the Cha-cha-cha to the boyband's Picture of You to a standing ovation and a score of 20.

Judge Loraine commended them on their "version of a Cha-cha-cha". She said, however, the lifts and jumps weren't part of an authentic Cuban Cha-cha-cha, and added that her assessment was "tough love".

Judge Julian said Ward was "the Greatest Showman in this contest - hands down". He saluted the modern fusion, but wanted more "softness and sexiness" from Johnny. 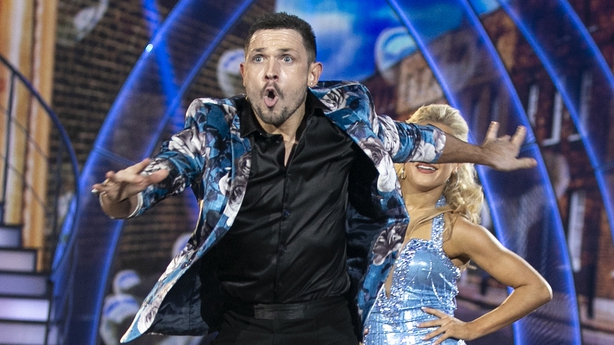 Judge Brian saluted Johnny's passion, but said his dances need "more character". "You're a great performer - the energy is there - just give us that essence," he advised.

Fair City favourite Clelia Murphy celebrated 1998 - the year she became a mother. Together with professional partner Vitali Kozmin she danced a Viennese Waltz to the Fair City theme tune for a score of 21.

Judge Brian said the start of the dance was "very beautiful" and after going "a little bit haywire", Clelia had recovered the routine very well.

Judge Loraine remarked that Clelia had been fighting illness in the run-up to the show. "You gave it your best on the night - that's all you can do," she said. 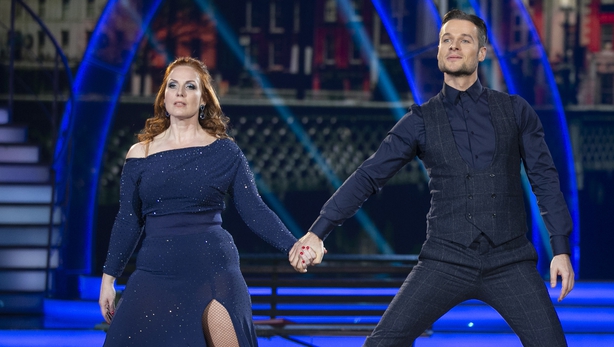 Judge Julian said Clelia had put her "heart and soul into it". "It wasn't perfect, but it was a lovely Viennese Waltz," he added.

Dublin footballer Denis Bastick's chosen year was 2011, when he first became an All-Ireland winner. With partner Valeria Milova he danced the Charleston to Snap!'s The Power for a score of 23.

Judge Julian described it as a "high octane Charleston". "You have come a million miles tonight - you were on fire," he enthused.

Judge Brian said he was surprised by the quality of Denis' footwork for such a big man. On the downside, he said Denis' dancing was still a "little bit robotic" and needed more fluidity. 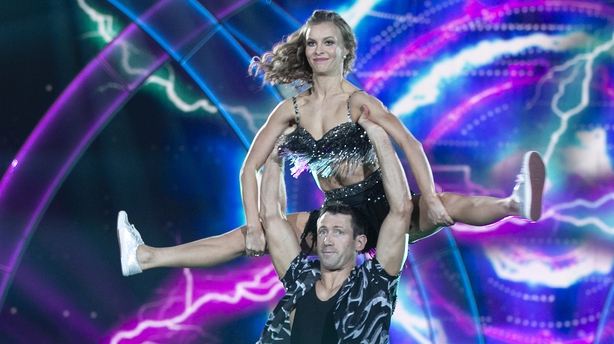 The Young Offenders star Demi Isaac Oviawe paid a deeply moving tribute to her late father with a Rumba with partner Kai Widdrington to Luther Vandross' Dance with My Father. They scored 16 for the routine.

Judge Loraine, fighting back tears, said there were moments of real beauty in the dance. "You just touched everybody here in the studio and at home," she added.

Judge Julian commended Demi's strength and courage and said she connected with the music "beautifully and emotionally". He said the "magic was in the imperfection" of her performance. 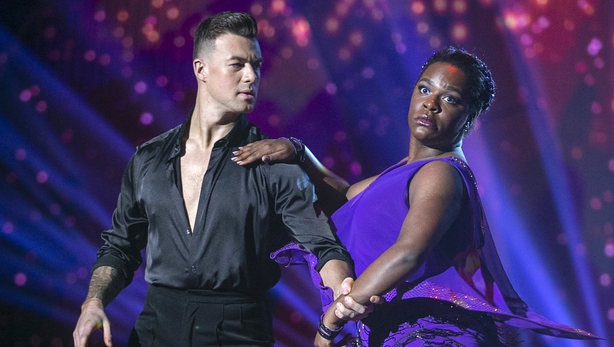 Judge Brian saluted Demi's bravery. He said he could see she had put "a lot of work" into the dance and urged her to continue her upward trajectory.

Sunday night's eliminated couple had earlier danced the Salsa to Ricky Martin's María for a score of 18. Darren took fans back to 1996 when Martin burst onto the scene and "opened my eyes to the world".

Judge Brian said the performance was "very frenetic and a bit manic looking at times", but he added that he loved the "Latin vibe" Darren brought to the routine.

Judge Loraine described it as a "full and vibrant Salsa". She urged Darren to "take the lead and be a little bit more in control". 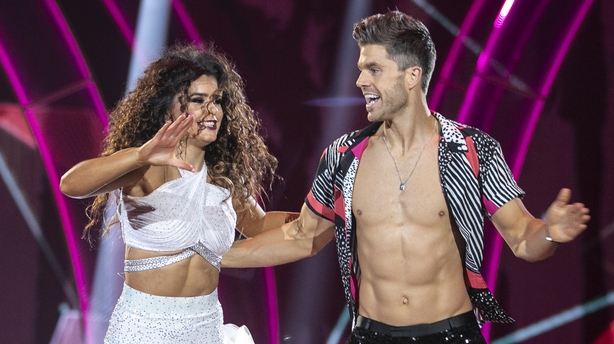 Judge Julian hailed it as "one loud and proud Salsa". He agreed with his colleagues that Darren needed to watch his timing.

Irish rugby legend Peter Stringer and his partner Ksenia Zsikhotska danced a Viennese Waltz to Christina Perri's A Thousand Years. Peter's very good year was 2015, when he and wife Debbie O'Leary tied the knot with Perri's ballad as their wedding dance. They scored 19 from the judges.

Judge Julian said people had seen "the more sophisticated gent" from Peter in his role as the leading man. "You're progressing week on week in this contest," he added.

Judge Brian said Peter needed to keep the dance powerful and that he sensed a little fear in the performance. 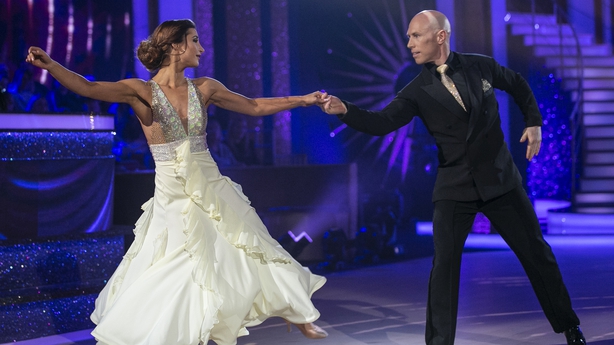 Judge Loraine described the opening and Peter's frame as "beautiful". "I know you're working and trying your best - I want you to multiply it by 100," she urged.

First up on Sunday were comedian Fred Cooke and his professional partner Giulia Dotta. Fred took people back to 1988, when his mother bought him tickets to Michael Jackson's concert in Cork. Their Tango to Jackson's hit Beat It saw them receive 17 points from the judges.

Judge Julian hailed Fred as "the King of Pop tonight" and saluted the couple's creativity. He stressed that Fred needed to work more on his core and frame. 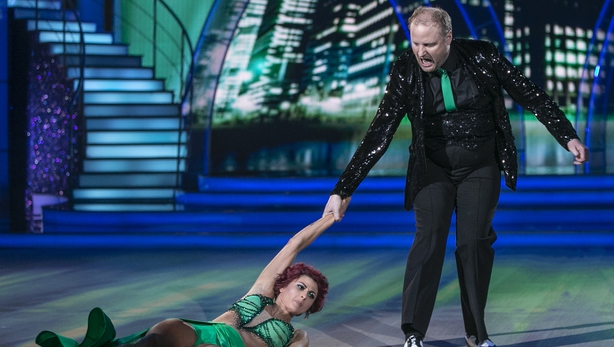 Judge Brian said it was a "nicely balanced" routine but also highlighted mistakes in Fred's topline.

And so to the nerve-wracking newness of Switch Up Week...

For the rest of the TV news, click here.