Irish photographer Christian Tierney has been nominated for an iHeart Radio Music Award for his work on tour with Niall Horan, and he told RTÉ Entertainment that he is "unbelievably honoured" to be shortlisted.

22-year-old Tierney embarked on his first world tour with Horan in 2018, and it's not just fans of the former One Direction star that have been hailing his photography, with the iHeartRadio Music Awards shortlisting him for their new Favourite Tour Photographer award.

"I'm unbelievably honoured that a massive platform like iHeartRadio have decided to nominate me for a huge award like this, especially since 2018 was my first year touring," Tierney told RTÉ Entertainment.

"I really owe a lot to Niall Horan for giving me that opportunity; he's been so good to me."

Tierney has been nominated alongside Helene Pambrun (Harry Styles), Andy DeLuca (5SOS), Josiah Van Dien (Shawn Mendes), Pixie Levinson (Dua Lipa), Rahul B (Camila Cabello), Ravie B (Beyoncé) and Zack Caspary (Why Don't We) for the award, which is in its first year.

Speaking about his fellow nominees, Tierney, who has also toured with Hailee Steinfeld, said, "I'm inspired by the work of every photographer nominated and it's really just an honour for me to be held in the same regard as them."

He described the new category being introduced to the awards ceremony as "a win for every music photographer, not just the ones nominated."

The winner will be decided through a public vote, and you can vote for him by Tweeting using these three hashtags: #FaveTourPhotographer #iHeartAwards #ChristianTierney 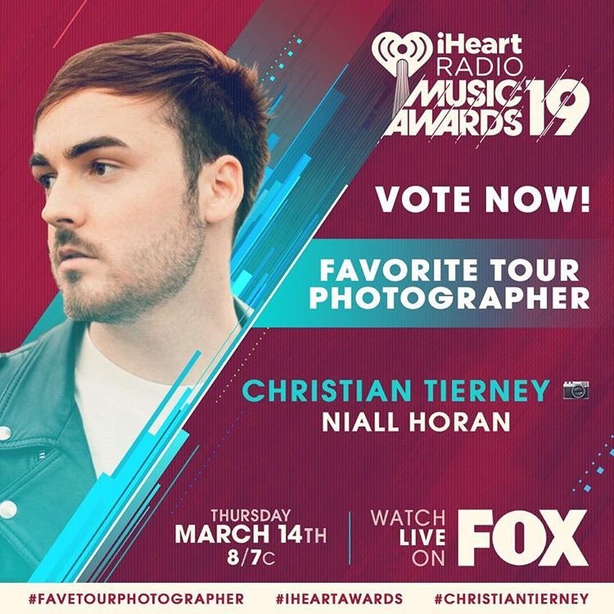