Michael Bublé surprised a young couple in the Late Late Show audience on Friday night when he helped the pair get engaged.

Turning to the audience, the singer and professional smoothie said, "There is a guy I see right now in the audience, his name is David O'Reagan . . . "

At host Ryan Tubridy's suggestion, Bublé then went over to meet the couple, only to be told by David that his partner of six years Ashley Kiely had told him that she would jump on Bublé "if she gets within three feet so be careful!"

To which Ashley said, "I actually can't move now so I'm not going to do it." 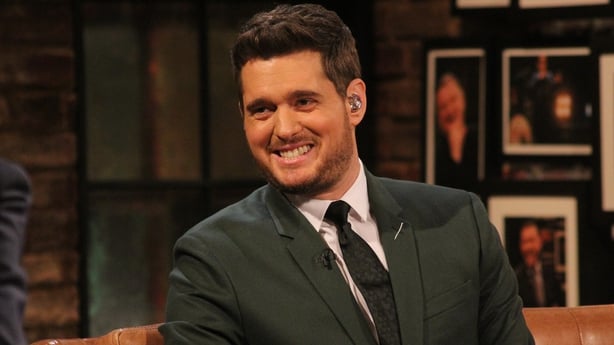 David then got on bended knee, saying, "She's a very special woman to me and to make the moment just a bit more special . . . " and presented her with an engagement ring.

She said yes and was then presented with a bunch of flowers by Bublé, who quipped, "God, you're so much out of his league!"

Speaking to Tubridy, Ashley said, "My cousin got engaged last year on the Great Wall of China so I told David he had to step up his game."

Bublé was later joined on stage by his fellow Late Late Show guest David Walliams to serenade the couple with a rather unorthodox duet of When I Fall in Love.