Harry Potter star Evanna Lynch is taking tonight's semi-final of Dancing with the Stars in the US in her stride, telling Ryan Tubridy on RTÉ Radio 1 that while she has found it hard competing against "big personalities" on the show, "there's something that resonates with some people of me being my normal, grounded, somewhat-more-quiet self".

The actress, from Termonfeckin, Co Louth, and professional partner Keo Motsepe will perform two routines tonight in their bid to avoid the double elimination and secure one of the four places in next week's Dancing with the Stars final.

"I love dancing and I've always been like, 'Please, can I be on that show?'," she told Tubridy on his RTÉ Radio 1 show on Monday morning. "So it just kind of worked out this year. I got a week's notice and came over and I couldn't wait to jump in."

"I danced a lot when I was a teenager," Lynch continued. "A little known fact, I'm actually a failed dancer, because I wanted to be a dancer rather than an actor. But I didn't really have the technique because I'd spent a few years doing the Harry Potter films and I wasn't really focused. So anyway, this was kind of my chance to revisit that love and expand it."

If anyone wants to employ a 27 year old amateur dancer after DWTS ends-? Mannn, I am so sad this isn’t my normal job 😭

The conversation then turned to youth mental health and how introverts can feel excluded, with Lynch emphasising that "introverts have their own strengths too".

"You know, I didn't really. I didn't have to change anything. I'm still here; I'm still in the semi-final. There's something that resonates with some people of me being my normal, grounded, somewhat-more-quiet self."

Lynch was joined on the show by her father Donal, describing him as "the most enthusiastic publicist I've ever had".

Listen to the interview in full here 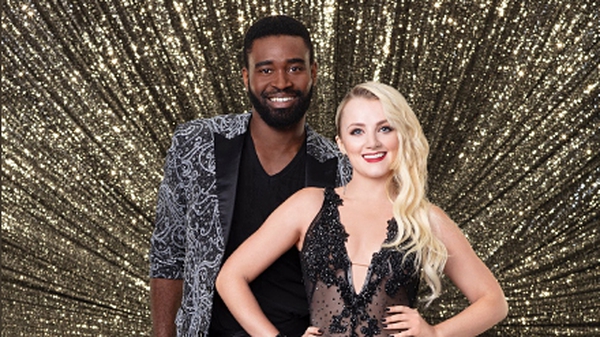 Irish actress Evanna Lynch joins Dancing With the Stars in US