Actor Morgan Freeman has said he is "devastated" over allegations made against him of harassment and inappropriate behaviour, adding that he "did not create unsafe work environments" and "did not assault women".

In a report published on Thursday, CNN detailed the allegations of harassment and inappropriate behaviour made against the Oscar-winning actor by eight women, with a further eight people claiming to have witnessed Freeman acting in an inappropriate manner.

Freeman subsequently issued a statement apologising to anyone he made feel "uncomfortable or disrespected". "That was never my intent," he said.

He has now issued a second statement, in which he said: "I am devastated that 80 years of my life is at risk of being undermined, in the blink of an eye, by Thursday's media reports.

"All victims of assault and harassment deserve to be heard. And we need to listen to them. But it is not right to equate horrific incidents of sexual assault with misplaced compliments or humour.

"I admit that I am someone who feels a need to try to make women - and men - feel appreciated and at ease around me. As a part of that, I would often try to joke with and compliment women, in what I thought was a light-hearted and humorous way."

"Clearly I was not always coming across the way I intended," Freeman continued. "And that is why I apologised Thursday and will continue to apologise to anyone I might have upset, however unintentionally.

"But I also want to be clear: I did not create unsafe work environments. I did not assault women. I did not offer employment or advancement in exchange for sex. Any suggestion that I did so is completely false."

Following on from the CNN report, the Screen Actors' Guild-American Federation of Television and Radio Artists (SAG-AFTRA), which gave Freeman a Lifetime Achievement Award in January, said it will reconsider the prize after the "compelling and devastating allegations" against him.

In a statement the union said: "These are compelling and devastating allegations which are absolutely contrary to all the steps that we are taking to (ensure) a safe work environment for the professionals in this industry.

"Any accused person has the right to due process, but it is our starting point to believe the courageous voices who come forward to report incidents of harassment."

The statement added: "Given Mr Freeman recently received one of our union's most prestigious honours recognising his body of work, we are therefore reviewing what corrective actions may be warranted at this time." 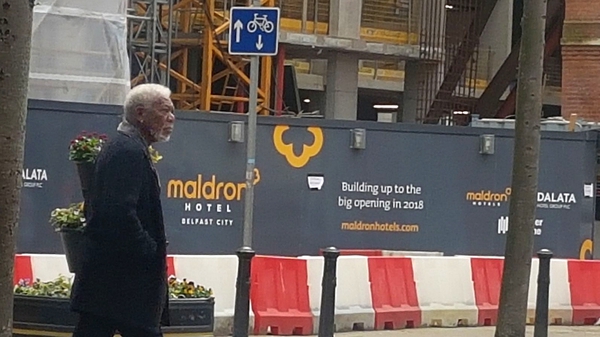 Freeman of Belfast. Shawshank star takes in the city