Britain's Prince Harry and Meghan have released three official wedding pictures while thanking those who took part in their celebrations, as well as those who watched all over the world.

The couple wed on Saturday (May 19) in a live-televised ceremony at St George's chapel in Windsor in front of an audience of millions.

Kensington Palace has now released a few official portraits of the royals which were taken by fashion and celebrity photographer Alexi Lubomirski, who also took the couple's official engagement photos.

The first picture that was released was of the beaming couple, newly titled the Duke and Duchess of Sussex, surrounded by their bridesmaids and page boys in the green drawing room at Windsor Castle following the carriage procession.

The Duke and Duchess of Sussex with the Bridesmaids and Page Boys, taken by photographer Alexi Lubomirski in the Green Drawing Room of Windsor Castle. #RoyalWedding pic.twitter.com/nFaPQSIzVl

A more casual black and white portrait of the couple showed them sitting on steps outside Windsor Castle with Prince Harry's hand resting on Meghan Markle's arm. The palace tweeted that they felt "so lucky" to have shared their big day with "all those gathered in Windsor and those who watched on television across the UK, Commonwealth, and around the world."

The Duke and Duchess would like to thank everyone who took part in the celebrations of their Wedding.

They feel so lucky to have been able to share their day with all those gathered in Windsor and those who watched on television across the UK, Commonwealth, and around the world. pic.twitter.com/RSa9ukqxLF

There was also a group photo along with other members of the royal household, including Queen Elizabeth II, Prince Philip, Prince Harry’s brother, William, Duke of Cambridge, their father, Prince Charles, as well as Markle's mother Doria Ragland.

The Duke and Duchess of Sussex have released three official photographs from their Wedding day.

Celebrity photographer Lubomirski said: "It has been an incredible honour and privilege to document The Duke and Duchess of Sussex's inspiring journey of love, hope and family; from the engagement photos, all the way through to the official wedding and family portraits on Saturday.

"This has been a beautiful chapter in my career and life, that I will happily never forget." 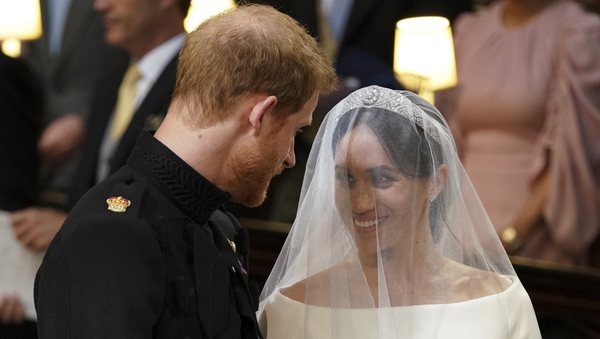