Holby City star Joe McFadden and professional partner Katya Jones were crowned Strictly Come Dancing champions on BBC One on Saturday night in a final that was as big on skill as it was on Strictly sparkle.

They saw off the challenge of former Emmerdale star Gemma Atkinson and partner Aljaž Skorjanec; singer Alexandra Burke and partner Gorka Márquez; and TV personality Debbie McGee and partner Giovanni Pernice to take the glitterball trophy after the public vote.

The absolute shock Joe and Katya had on hearing they had won #Strictly!😱#StrictlyFinal pic.twitter.com/xKqmN4jk3j

Forty-two-year-old McFadden is the 'oldest' Strictly champion since the show began in 2004, while partner Jones was competing in her first final.

McFadden, who had moved from raw hopeful to dark horse to favourite, said he did not expect to win Strictly "in a million years".

"It feels completely surreal and I'm so in awe of everyone who started all of those weeks ago," the Scotsman continued.

He described partner Jones as "an amazing woman" and thanked her for "sticking with me and persevering".

Jones said her partner had been "so brilliant" as congratulations poured in for the couple.

It's been fantastic watching the talented #Strictly stars over the past few weeks - congratulations to @mrjoemcfadden, commiserations to my constituent @thedebbiemcgee! #StrictlyFinal

I said last year that @Mrs_katjones is a genius and would go on to be a Knock-Out Strictly Superstar - And here we are! Huge congratulations to Katya and the brilliant @mrjoemcfadden - such worthy @bbcstrictly Champions! I’m so pleased for Joe and so so proud of Katya ! 😁

Saturday night's Strictly final saw the four couples perform three numbers each: a dance chosen by the judges from all their routines; a show dance and the contestants' own favourite dance from the series.

The judges' scores only served as guides on the night and had no weight in the final voting, which was all down to the public.

McFadden and Jones scored 39 points for their Viennese Waltz, as chosen by the judges; 39 for their show dance and 40 for their own favourite, the Charleston. It was the couple's first perfect score of the series in their last dance on the show.

Burke and Márquez, who had scored more 10s in the series than any other couple in the final, began the night with a perfect score of 40 for their American Smooth.

They received 39 points for their show dance and another 40 for their own favourite routine, the Jive.

McGee and Pernice were tasked with dancing the Salsa by the judges in their first dance, scoring 39.

They then received 38 points for their show dance and, later, a perfect score of 40 for their Argentine Tango.

Atkinson and Skorjanec's challenge for the glitterball trophy began with the judges' choice of a Paso Doble, which scored the couple 38.

They received 37 for their show dance but then went on to score their highest mark of the series, 39, for their own favourite routine, the American Smooth.

It was one of the best finals in the show's history, and just before 9pm on Saturday it was revealed that it was to be McFadden and Jones' night. They thanked their fans before going off to celebrate with, presumably, a bit of dancing.

💗 Joe and Katya would like to thank all of you that supported them #Strictly #StrictlyFinal pic.twitter.com/RAchLNwY3S 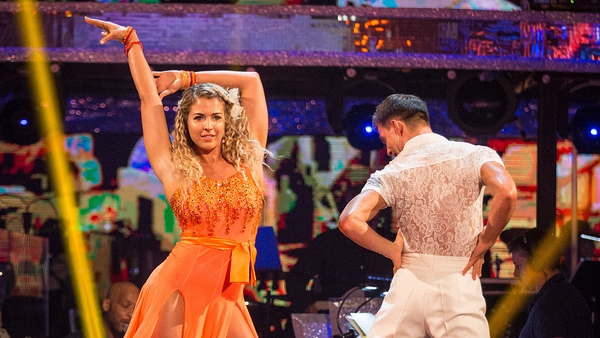