Strictly fans where in a tizzy at the weekend as The Saturdays star and her professional dance partner appeared to share a kiss after they made it through to next week’s show.

King and Pritchard have been the subject of romance rumours since they first fox-trotted across the dancefloor in September.

And while they have remained coy about the status off their relationship away from glitz of Strictly, this weekend their fellow contestants and host Claudia Winkleman put pressure on them share a kiss after the judges praised their "chemistry".

Following their quickstep on Saturday - which earned the couple's first ever nine - chants of "kiss, kiss, kiss" could be heard being made by the other professionals and celebrities.

Winkleman even got in on the act telling Pritchard: "Oh go on AJ".

King has previously said the professional dancer was "lovely looking" but added rumours were "inevitable" during the show.

"We have to just sort of laugh it off."

Amazing! @mollieking and @Aj11Ace could NOT be happier to be through to the  #Strictly Quarter Finals 🎉 pic.twitter.com/iPnlidxkyg

The couple did nothing to fan the flames of romance on Sunday as they came extremely close to a smooch after being declared safe on Sunday's results show.

As soon their names were announced they began jumping for joy enthusiastically while showering each other with hugs and what appeared to be a kiss.

A head for heights and feet made for dancing. Just riveting 👋 @mrjoemcfadden @Mrs_katjones #Strictly pic.twitter.com/8md1udFoG5

Saturday night's show saw Holby City star McFadden top the leaderboard as he scored a new high of 38 for his 1920s-inspired quickstep with Katya Jones, while combined with a further six points after a second-place finish in the bonus group dance pasodoblethon.

Scottish comedian and presenter Susan Calman was the ninth celebrity to depart the dancefloor after facing Burke in the dreaded dance off.

Strictly Come Dancing continues next Saturday on BBC One at 7.05pm 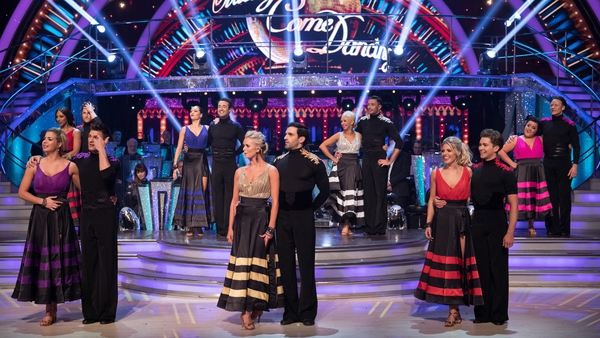 Another celebrity leaves the Strictly dancefloor