You know how it goes. You wait decades for an archly intelligent and musically sophisticated vintage US act to come along and several arrive at once.

Down in the 3Arena for Bluesfest over the bank holiday weekend, fans of a certain age rejoiced at the sight of Hall and Oates, The Doobie Brothers and Steely Dan performing over the course of three nights. Steely Dan, the New York jazzers who showed the West Coast how to do rock with smarts back in the seventies, were by the far the greatest of these with their often imitated brand of muso rock and rhythm and blues.

They were making their return to Dublin after a 21-year absence, when they played the same venue at a time when it was still a windy shed with the acoustics of an abandoned tractor factory. Much has changed; the 3Arena has improved beyond recognition but Saturday and Monday's shows must have been bittersweet occasions for remaining founding member Donald Fagen following the death, only two months ago, of Walter Becker, his friend and musical foil since 1967.

A lone mic stand has been kept on the stage in his honour and it is one of many poignant moments at the second of the band's Dublin shows.

Caught somewhere between the disdain of jazz snobs and music fans who like their pop a little less erudite and well, ironic, Steely Dan were always more about grooves and beats than the intricate time signatures

Fagen shambles on stage to the instrumental Fan it, Janet looking like an eccentric uncle at a Halloween party and plonks himself behind his command module - a Fender Rhodes from which he will rarely move for the hour-and-40-minute set that races up and down the band’s original 1972 to 1980 back catalogue.

In shades and with his head thrown back in near euphoria as the music envelopes him, he has all the mannerisms of a white Ray Charles. He is on form and mentions that tonight’s gig is the last of the year and perhaps it’s this celebratory mood that inspires him to kick off with Bodhisattva, the joyously combustible guitar gallop from Steely Dan's second (and possibly best) album Countdown to Ecstasy.

It is a night of celebration but also one imbued with smirking self-reproof and wry self-analysis. Hey Nineteen, typical of the band’s man out of time, fashion and relevance themes, is as cool and funny as they get and ends with delicious slide trombone solo.

The killer brass section also includes alto and tenor saxophones and trumpet and while Becker is missed, Jon Herington is the dictionary definition of a guitar ace. He peels off the controlled syncopation of Josie, the cool frills of Hey Nineteen and the blistering hooks of My Old School and plays fast and clean on a scintillating Reelin’ in The Years. Drummer Keith Carlock equally knows when to hold back and when to play furious and splashy virtuoso displays.

New Frontier, a sparking pop song and Fagen’s own jaundiced ode to his Atomic Age childhood, is a beauty and he skips ahead decades in autobiographical terms with Steely Dan's most acutely observed song of middle-aged regret, Aja. They boldly follow it with Green Earrings, a mostly instrumental track that sees guitars almost liquefy and manage to sound like both an exotic slice of avant garde and the incidental music from a seventies American cop show.

The killer brass section also includes alto and tenor saxophones and trumpet and while Becker is missed, Jon Herington is the dictionary definition of a guitar ace.

Caught somewhere between the sniffiness of jazz snobs and music fans who like their pop a little less erudite and well, ironic, Steely Dan were always more about grooves and beats than the intricate time signatures and superb playing that their most ardent followers pride themselves on knowing intimately. Not to mention the lyrics, which remain some of the drollest and saddest in all of popular music.

This is clear from the way the first forty minutes of Monday's show are front-loaded with the band’s most famous songs, including Babylon Sisters, during which Fagen’s slightly wayward melodica runs and solos are like an arched eyebrow to the endless slickness of the band and the cooing of backing singers, The Danettes.

However, Dirty Work from the band’s debut album Can’t Buy a Thrill, is a letdown. Originally sung by David Palmer, one of several vocalists the band tried out due to Fagen’s initial reluctance to take the mic, it’s a model of soft rock smoothness but in the live setting, it's robbed of its sorrow and contrition when the Danettes turn it into an exercise in vocal vamping and strangulated high notes.

Josie (more cowbell!), a superb Peg and a scorchingly good My Old School follow but it's a frantic scramble of Kid Charlemagne, a song populated by more lowlifes, criminals and addicts than all of Steely Dan songs put together, which really hits home.

The encore is as short, crisp and succinct as the rest of the set has been expansive and musically rich; Reelin’ in The Years, a song with a particular resonance in Ireland after years of welcome repeats of the TV series of the same name.

Kid Charlemagne, a song populated by more lowlifes, criminals and addicts than all of Steely Dan songs put together, which really hits home.

After complaints about the quality of the sound at Hall and Oates on Sunday evening, Monday's show saw a vast improvement in the acoustics in the cavernous venue but Fagen, never quite the Sinatra of tasty jazz and r`n'b, turns 70 in January and his unlovely but hugely expressive voice wavers and cracks in places.

It only serves to add a real pathos and poignancy to the night; Fagen has hinted that now that his comrade is gone, Steely Dan as an on-going project is coming to an end. Even in their twilight years, they sounded superb on Monday evening. We’re unlikely to see an act of their strange beauty, smarts and grace ever again.

Time Out of Mind

I Want To (Do Everything for You) (Joe Tex cover)

Reelin' in the Years

The Untouchables (theme from TV show) 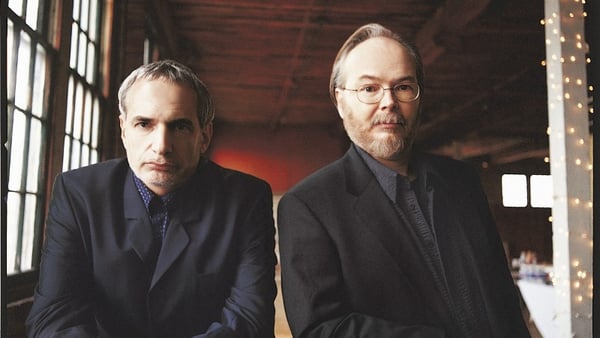 Reeling in the years: Steely Dan to play Dublin