Kevin Spacey has apologised to actor Anthony Rapp, who accused the Hollywood star of making a sexual advance on him at a 1986 party when he was only 14 years old.

Spacey's announcement came after Rapp - best known for being part of the original cast of the hit Broadway musical Rent - made the accusation in an interview with Buzzfeed News.

The House of Cards actor also said in the statement, which was posted on his Twitter account at midnight, "I choose now to live as a gay man."

The 58-year-old said he did not remember the encounter but that "if I did behave then as he describes, I owe him the sincerest apology for what would have been deeply inappropriate drunken behavior."

He went on say that Rapp's accusation "encouraged me to address other things about my life."

"As those closest to me know, in my life I have had relationships with both men and women. I have loved and had romantic encounters with men throughout my life, and I choose now to live as a gay man.

"I want to deal with this honestly and openly and that starts with examining my own behavior."

Rapp, 46, told Buzzfeed that in 1986, while both he and Spacey were performing in Broadway shows, Spacey invited the then 14-year-old to a party at his New York apartment. Spacey was 26 at the time.

The Star Trek Discovery actor said he was in Spacey's bedroom watching TV when Spacey appeared in the doorway at the end of the night, "kind of swaying" and apparently drunk.

He said Spacey picked him up, put him on the bed and lay on top of the teenage boy.

"He was trying to seduce me," Rapp told Buzzfeed. "I don't know if I would have used that language. But I was aware that he was trying to get with me sexually."

Rapp said he squirmed away after a brief period of time and went into the bathroom. Shortly after, he left Spacey's apartment and went home.

I came forward with my story, standing on the shoulders of the many courageous women and men who have been speaking out 1/3

to shine a light and hopefully make a difference, as they have done for me. 2/3

Everything I wanted to say about my experience is in that article, and I have no further comment about it at this time.

Spacey, a Tony Award winner for Lost in Yonkers, stars in the Netflix political drama House of Cards. He also served for ten years as artistic director of London's Old Vic theatre company.

Meanwhile, the editor of Britain's Gay Times magazine Josh Rivers has criticised Kevin Spacey's "highly problematic" decision to open up about his sexuality after he was accused of historical harassment.

He said: "It would make more sense for him to come out as an alcoholic than to conflate his sexuality with his alleged behaviour."

"Kevin Spacey choosing this moment to declare his sexuality, as if it has anything to do with his alleged behaviour, is highly problematic."

He added: "This conflation is precisely the type of manipulation to which our community has become acutely attuned, and we won't stand for it.

"Society has come a long way, but we are still fighting for the rights and visibility of many in our community ... Kevin has done us all a disservice."

A host of celebrities have also taken to Twitter to criticise Spacey for coming out as gay in the same statement as his apology to Anthony Rapp.

Star Trek actor Zachary Quinto said it was "deeply sad and troubling" that this is the manner Spacey chose to come out, adding that he thinks it is "a calculated manipulation to deflect attention" from the accusation of abuse.

American Horror Story star Billy Eichner said Kevin Spacey "has just invented something that has never existed before: a bad time to come out".

Kevin Spacey has just invented something that has never existed before: a bad time to come out.

Comedian and writer Larry Wilmore condemned Spacey's statement as "wrong on so many levels".

Kevin Spacey's comment was wrong on so many levels. https://t.co/5pFhiqMK5W

Savage Love writer Dan Savage said that "no amount of drunk or closeted that excuses or explains away assaulting a 14-year-old child".

Nope to Kevin Spacey's statement. Nope. There's no amount of drunk or closeted that excuses or explains away assaulting a 14-year-old child.

Being gay should never be equated with sexual assault or pedophilia. Thanks for giving the homophobes more ammo #KevinSpacey. 🙄

Meanwhile, former Star Trek star George Takei said in a statement to The Hollywood Reporter, "When power is used in a non-consensual situation, it is a wrong. For Anthony Rapp, he has had to live with the memory of this experience of decades ago.

"For Kevin Spacey, who claims not to remember the incident, he was the older, dominant one who had his way. Men who improperly harass or assault do not do so because they are gay or straight - that is a deflection. They do so because they have the power, and they chose to abuse it." 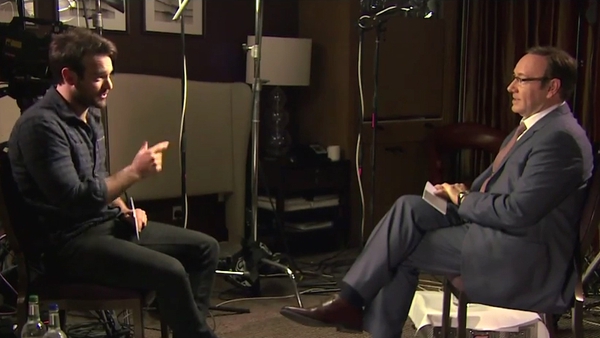 Watch! Spacey and Cox interview each other