TV presenter Charlotte Hawkins is the third celebrity to leave Strictly Come Dancing after losing out to EastEnders' Davood Ghadami in the dreaded dance-off.

So very sad @BrendanCole & I are out of @bbcstrictly it's been my magical sparkly world for the past few weeks, it'll be hard to say goodbye pic.twitter.com/MUxPnz0LMY

I loved every second. Thank you back for an incredible time. Can't believe we don't get to do it all again today! Friend for life indeed. X https://t.co/UjtY1OdAu4

The judges' scores were combined with the results of the viewers' votes to decide the lowest scoring two couples facing the dance-off. This weekend, that was Hawkins and her professional partner Brendan Cole; and Ghadami and his partner Nadiya Bychkova.

Both couples performed their routines again; Ghadami and Bychkova did their Viennese Waltz to Say You Love Me by Jessie Ware and Hawkins and Cole performed their Jive to Marry You by Bruno Mars in a bid to impress the judges and remain in the competition.

After both couples had danced a second time, the judges delivered their unanimous verdict to save Ghadami and Bychkova.

"I'd like to save the couple that I thought danced the best and who fixed a problem with a foot on the floor and that is Davood and Nadiya," Craig Revel Horwood said of his decision.

Darcey Bussell added, "The couple who I'd like to save on giving a stronger technical performance is Davood and Nadiya."

Bruno Tonioli said he made his decision "without a shadow of a doubt."

Head Judge Shirley Ballas said she would have voted the same way.

Hawkins described her time on the show as "amazing."

"It's been brilliant from start to finish, it really has been," she said.

"A huge thank you to Brendan who has just been fantastic, we've had such a great time going through all the dances. You've always been there for me, getting my back, there with the support." 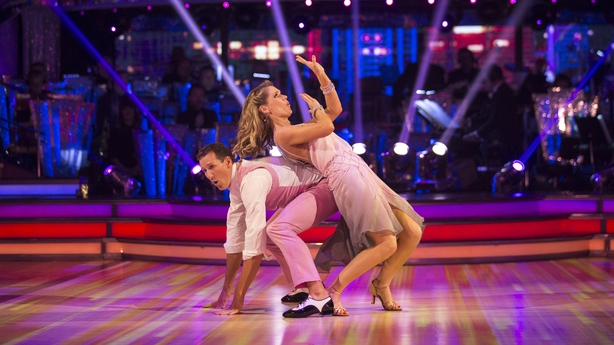 "I was trying to get better, I'm going out knowing that I gave it my best and that’s all you can do," she added.

The remaining twelve couples will take to the dancefloor again on Saturday when Strictly Come Dancing returns on BBC One.