A lavish La La Land-inspired opening set the tone for the evening, with a number of standing ovations throughout.

Basking in the praise of both the audience and the judges were Merrygold and Manrara, whose Trolls-themed Cha-Cha-Cha was the most complete and colourful performance of the night, earning them three '9's and an '8'.

🎶  Nothing we can see but you, when you dance, dance, dance 🎶  @AstonMerrygold @JManrara #Strictly pic.twitter.com/1c2qTBJnpw

In second place were singer Alexandra Burke and her partner Gorka Márquez. Their My Fair Lady-celebrating American Smooth scored them 33 points.

While only scoring 20 points, comedy star Susan Calman and partner Kevin Clifton's Wonder Woman-loving Samba was one of the show highlights for many, including author JK Rowling who tweeted: "@SusanCalman That might have been the best thing I've ever seen on television. #StrictlyComeDancing2017."

💥 @SusanCalman, a hero in your satin tights, fighting for your rights. WONDER WOMAN! @keviclifton #Strictly pic.twitter.com/mU1hrW5EOO

At the bottom of the board, the Rev Richard Coles and Dianne Buswell received the lowest score, 14, for their Flash Gordon-flavoured Paso Doble.

One point above them were presenter Ruth Langsford and Anton du Beke, whose Rhumba to Diamonds are Forever failed to sparkle.

There was one awkward moment during the show when professional dancer Brendan Cole took issue with Head Judge Shirley Ballas' assessment of his Top Gun Tango with presenter Charlotte Hawkins.

Dancing out of the ⚠️ Danger Zone ⚠️  and going in the right direction @charlottehawkns and @brendancole. 👏 pic.twitter.com/gK7lh4Nzqn

Ballas pointed out "rise and fall" in the routine, but Cole said: "There was no rise and fall."

The Head Judge then told Cole to watch back the footage, to which he replied: "I will, my dear."

Ballas' colleague, Bruno Tonioli, then told Cole he should be "more respectful" towards the Head Judge.

Sunday's show will see the second dance-off of the series, with another couple then saying goodbye to the dancefloor. 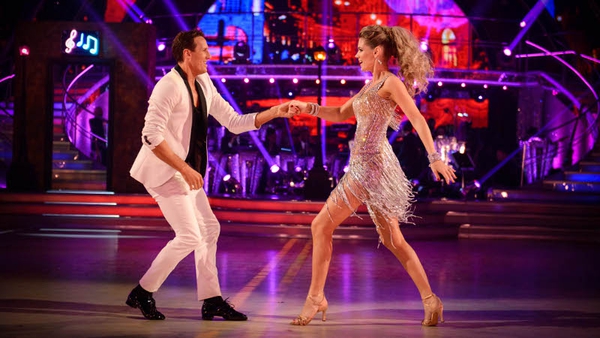