Playboy founder Hugh Hefner has died aged 91, surrounded by his family and friends at his home in Los Angeles.

The magazine posted a photo in black and white of its creator, accompanied by one of his quotes that read: "Life is too short to be living somebody else's dream."

Describing him as an "American icon", they tweeted: "Hugh M. Hefner passed away today. He was 91. #RIPHef"

Hefner, who in 1953 founded the Playboy brand that became part of the 20th century's shifting attitude towards sexuality, died of natural causes in his Beverly Hills home last night - the famed Playboy Mansion - according to a further statement from Playboy Enterprises.

His son Cooper Hefner, the chief creative officer of Playboy Enterprises, said in a statement that his father "defined a lifestyle and ethos that lie at the heart of the Playboy brand".

Cooper added: "He defined a lifestyle and ethos that lie at the heart of the Playboy brand, one of the most recognizable and enduring in history.

"He will be greatly missed by many, including his wife Crystal, my sister Christie and my brothers David and Marston, and all of us at Playboy Enterprises."

Well past retirement age Hefner continued to take an active role in the editorial side of his magazine.

Late into his life he also frequented nightclubs and maintained a group of young girlfriends, a lifestyle he credited with keeping him young.

In a 2003 interview, Hefner said he "would like to be remembered as somebody who had a positive impact on the changing social sexual values of his time".

While tributes have been made today following his death, Hefner's attitude towards women divided opinion.

Catherine Mayer, co-founder of the Women's Equality Party, wrote: "His version of sexual liberation of course was a con... The only freedom was for men to exploit and commodify women."

The magazine was banned in Ireland until 1995. 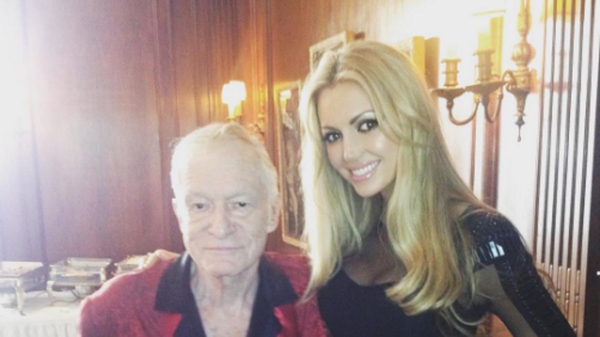