The stars of the small screen lined up on the red carpet at the 69th Primetime Emmy Awards on Sunday night. Check out all the glitz, glam and gúnaí here.

The A-List event, which celebrates the very best in US television, was hosted by comedian Stephen Colbert at the Microsoft Theatre in Los Angeles.

Stranger Things was nominated for 19 awards, including one for 13-year-old Millie Bobby Brown who played Eleven on the hit show.

While she did not win this year, she definitely made her mark in style stakes with this ballerina-inspired gown.

Speaking ahead of the Emmys last night about the possibility of a second series, Kidman revealed that while the cast really want to make it happen, "it is complicated".

Dern added that it was an "incredible blessing that Kidman and Witherspoon" got together to make the show, as it has been a "special experience" to work with such "wonderful ladies".

It's no wonder Westworld's Tessa Thompson twirled her way down the red carpet - the show received an incredible 22 nominations.

Jonathan Banks arrived arm-in-arm with his wife Gennera and was nominated in the Outstanding Supporting Actor in a Drama Series for Better Call Saul.

He missed out to John Lithgow (The Crown) who celebrated with his wife Mary Yeager.

Speaking on the red carpet Vergara said she hoped the show will "go on for eternity".

E! host Giuliana Rancic, who is no stranger to red carpets, stunned in a black chiffon ballgown.

Edie Falco made sure to stand out from the crowd in a stunning red dress.

Dancing With The Stars judge Julianne Hough chose a black gown, embellished with delicate pink flowers for her moment on the red carpet.

First to arrive on the red carpet was former The Hills star Kristin Cavallari in a lavender dress with slits up the side and silver heels. 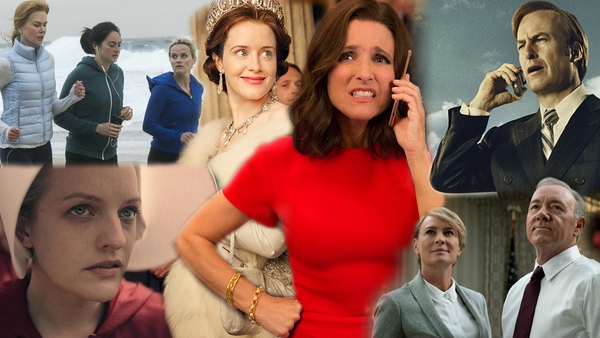