From eighties pop to nineties nostalgia to cutting edge dance and indie, as ever, Electric Picnic boasts a very varied line-up. Here's our rough guide to festival bi-location with a pick of our top acts to see.

Squaring up to Duran Duran for the greatest Greatest Hits set at EP, The Pretenders could well take the title of Band of the Weekend to (Chelsea) boot. Along with the best of back catalogues - Brass in Pocket, Kid, Message of Love, Don't Get Me Wrong, Back on the Chain Gang and so much more - Chrissie Hynde's crew also have the amps-and-attitude of their recent Dan (Black Keys) Auerbach-produced album Alone to get Stradbally strutting on Sunday evening. Save a prayer for Simon Le Bon and co . . . Harry Guerin

Nurse turned retro electro diva Kelly Lee Owens released her quietly stunning self-titled debut album earlier this year. The Welsh wizard began her music career in indie anonymity before hearing the siren call of dance beats, beautifully modulated ambience and atmospherics. That debut features Owens’ utterly strange and beguiling vocals and lyrics that seem half sang, half spoken from somewhere out in the ether. If you’ve ever wanted to hear an ethereal spirit fronting Orbital or Röyksopp (and who hasn't?!), now’s your chance. Alan Corr

What better way to finish up your festival weekend than with one of the most infectious live acts of recent times? The Scratch is a lusciously-haired, four-piece acoustic metal/trad band from Dublin, and if that doesn’t pique your interest we're not sure what will. You might recognise the lads from the video of them busking at the Rory Gallagher festival in Donegal, which went viral earlier this summer. This is a great opportunity to see The Scratch out in full force. Expect lots of expert guitar playing, impossibly catchy tunes, and head banging. Not to be missed. Sarah McIntyre

This could be your last time to see the iconic hip hop act A Tribe Called Quest on Irish soil, so this is sure to be a gig to remember. They've made an indelible mark on the hip hop scene since forming in Queens, New York in the mid-80s, and their music is still as relevant as ever. Sadly, original member Phife Dawg died last year, but their Electric Picnic gig will see MCs Q-Tip, Jarobi White and DJ Ali Shaheed Muhammad take to the stage. They have too many great tracks to mention, but the chance to see Scenario, Electric Relaxation or Can I Kick It? is too good to pass up! SM

The unflappably dapper Neil Hannon returned last year with the back to his roots Foreverland, an album that reaffirmed his place as Ireland’s prince of the cut-glass bon mot and the bel esprit of superbly-crafted chamber pop melodies. Pop's little emperor may be all of those things (he can probably cook a damn fine omelette too) but Hannon is also at heart a showman who is just as likely to vamp it up behind the piano as arch a quizzical eyebrow. Expect songs from Foreverland and a rundown of his truly impressive back catalogue. Rather! AC

Hard-learned wisdom dictates that you should always bring a warm jacket to any festival, and there'll be chills aplenty when London Grammar bring on the night ahead of headliners The xx on Friday - talk about a double whammy of drama. Old souls Hannah Reid, Dominic Major and Dan Rothman delivered one of the albums of the year with Truth is a Beautiful Thing, magically turning the intimate into the anthemic and the other way 'round. No matter who else is playing, the chance to hear those songs live is the offer you shouldn't refuse - we're expecting one of those 'I was there' EP sets that gets us through winter and all the way up to next September. HG

2fm Live: DJ Mo K with RTÉ Concert Orchestra, Rankins Wood, Friday, 8.00pm
2fm Live: DJ Jenny Greene with RTÉ Concert Orchestra, Rankins Wood, Friday, 9.00pm
Calling all hip-hop fans, there's a party in the woods this Friday and you're invited. In what promises to be a very special start to the Picnic weekend, 2FM’s DJ MO K and the RTÉ Concert Orchestra will tell The Story of Hip Hop. Beginning with first original commercial hit in 1980 right up to the contemporary hip-hop hits of 2017, expect scratching, rapping and a full on visual and sound experience. The party then continues as Jenny Greene joins the Concert Orchestra to perform a 90s club classic set with singer Gemma Sugrue. Rhythm is a Dancer, Children, Not Over Yet, Everybody’s Free and Insomnia are just some of bangers lined-up to get you dancing in your wellies. Suzanne Keane


Rag'n'Bone Man's hit Human may be the catapult for a huge crowd draw on Sunday afternoon, but expect to hang around once he has belted out his hit track. Rag'n'Bone Man, aka Rory Graham, may have only come to mass attention this year, but he is by no means a one-hit wonder. In fact, he has been on the go for over 15-years fine tuning and honing his craft. With his retro-growl blues/R&B-based music Graham has plenty of stories to tell especially with the beat-filled Bitter End and teary ballad Love you any Less. If you come back down to earth after the soaring Human, you'll be floating in the clouds once again with the uplifting gospel number Skin. Do not miss this set, it sure to be talked about long after the Picnic has ended. SK

Arguably the ultimate band for the wee small hours, Interpol are relocating to Stradbally from the dark end of the street. Messrs Banks, Fogarino and Kessler are doing the European rounds on their Turn on the Bright Lights 15th anniversary (yikes) tour, so you can relive your early-Noughties ennui and notions to the best of broody soundtracks as Saturday night morphs into Sunday morning. Leather trousers and suit jackets optional; three-step dancefloor shuffle mandatory. HG

Lucky people of the picnic, you are being given not one, but two chances to see The Strypes, who count the likes of Elton John, Dave Grohl and the Arctic Monkeys as fans. Yes, this Cavan band is definitely a must-see. The four-piece will no doubt play a no nonsense set of speed blues, mixing re-workings of rhythm and blues classics with their originals. Their latest album, Spitting Image, shines a light on their song-writing abilities, and you're in for a treat if they play the toe-tapping Behind Closed Doors and Easy Riding. SK

If you're looking for band to sum up the greed, gloss and vanity of the 1980s, Duran Duran is your only man. Fronted by Simon LeBon, this lot would lick themselves to death if they were made of chocolate - but they've also produced some delicious slices of pop music. John Byrne

Crop tops and combat trousers on standby! Get ready for some 90s nostalgia and some welcome cheesy favourites at EP, as both S Club Party (Saturday, 7.00pm) and 5ive (Saturday, 8.15pm) are gearing up to Slam Dunk da Funk and get everybody up. If you're ready to get down at EP and put your hands in the air like ya just don't care, then the Electric Ireland Throwback Stage is where all of your dreams will come true. The Throwback Stage will also screen old school movies during the day, showing Clueless, Honey, I Shrunk The Kids, Police Academy and Dumb and Dumber amongst others. Like, hello!?! We are totes there. Laura Delaney

The Comedy Tent has always been a favourite among Picnickers and this year the likes of Foil Arms and Hog, The Rubberbandits and Al Porter all taking to the stage, but it's rising star and all-round legend Joanne McNally who we are most excited about seeing. This awesome lady manages to win over the hearts of anyone who crosses her path. From telling tales about her Tinder fails to her controversial feminist gags, McNally is a pro at keeping the audience wanting more. You might even win yourself some hilarious chat-up lines to win over that someone special over the weekend. LD

Pretty prolific by today's standards, former Fleet Fox Josh Tillman recorded under various guises before adopting the Father John Misty moniker for 2012's Fear Fun. His set at Glastonbury was a bit samey, but the quality is high and this pop preacher's got a lot of things to say. JB

The ageing Nutty Boys will always put on a show and should be superb EP crowd pleasers. Being in a crowd during Baggy Trousers is a bonkers experience. Their pop-tinged take on Ska is just what festivals are made for, but if you get the chance, check out TheSkatalites. They're one of the originals. JB

We can all fall into the trap of staying in the campsite for a few too many hours on the Friday once you're over the hassle of pitching your tent, but if there was ever a reason to get yourself arena-bound at a reasonably early hour, its Kildare duo Mix & Fairbanks. Opening the Casa Bacardi stage, they will ensure you start your weekend with a boogie as their brand of electro-disco is just impossible not to move to. Sinead Brennan

Hip hop act Run the Jewels (aka RTJ) is sure to be one of the highlights of this year's EP. Since releasing their debut album back in 2013, the duo consisting of rapper/producer El-P and rapper Killer Mike have gone on to both critical and commercial success, for good reason. No stone is left un-turned as they tackle today's political climate and society in their urgent, astute, frequently vicious lyrics. They feed off one another's energy on-stage, trading lines back and forth effortlessly. You'll be hooked. SM

A good rule to live your life by: never miss the chance to see Le Galaxie. Whether it's one of their legendary DJ sets or incredible live shows, you are always 100% guaranteed a great time. Their energy is infectious; it sets them apart from every other act in Ireland today, and their tunes are absolute floor fillers. Somehow their Electric Picnic sets always seem to be even more impressive, so if form is anything to go by, it's sure to be something special. SB

They're festival staples for a reason; All Tvvins are incredibly good at what they do and the atmosphere is electric at their shows. They are going from strength to strength, their sound is growing bigger and more energetic, and their visuals also deserve a shout out. You'll be singing along to hits like Darkest Ocean, These Four Words and Resurrect Me and while they sound just as good as they do on their album when they play live, it's all turned up to eleven on the day. SB 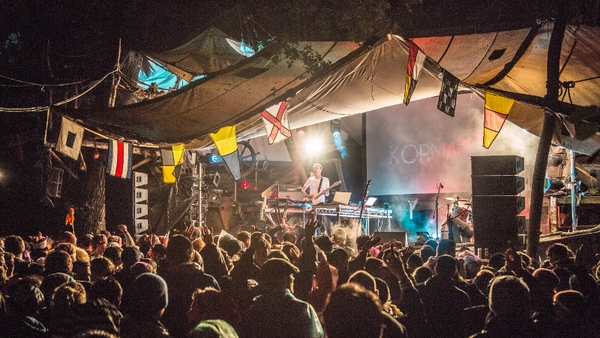