If you're going no further than the sofa, here are some tips on what's worth watching on the box over the weekend.

After some of the most relentless hype ever witnessed in sport (and that's saying something), the fight of the millennium is finally upon us – and you're welcome to it.

The boxing world is now starting to look as spontaneous as the wrestling one, and don't be at all surprised if there's a re-match between these two already in the hypey pipeline.

Ireland's Conor McGregor, the undisputed king of UFC, takes on the current boxing supremo at the T-Mobile Arena in Las Vegas, where people have paid substantial sums to watch the action live.

For a much lesser cost, you can catch it live on Sky Box Office.

To get you in the mood, here's a documentary called The McGregor Effect. It looks at the nation he inspired, from artists and entrepreneurs to athletes, the documentary aims to get to the heart of the characters and their stories.

In the first episode, Scottish family team the Watsons are led by their highly competitive 22-year-old captain Catriona.

Mother Fiona is on hand to boost team morale, but how will they cope when one of the team reveals they 'can't physically do riddles'.

This sounds daft but looks the business. To discover just how like us animals really are, animatronic spy creatures infiltrate the animal world to explore their complex emotions.

Spy Pup, for example, makes friends with a wild dog pack to investigate their maternal love and has a dangerous encounter with lions and elephants.

Baby Spy Crocs discover the extraordinary devotion of a mother crocodile and take a rollercoaster ride inside her mouth as she carries her babies to water.

You get the drill, nature lovers? Enjoy!

Sixteen months after stopping the coup, the Nathan James searches for seeds with immunity to the red rust virus affecting the world's plant life; Tom Chandler (Dane) attempts to live a quiet life in Greece.

The Beeb's drama output has been phenomenally good in recent years, so this should be worth at least a gander, and the cast includes Tara Fitzgerald and Martin Shaw.

Here's the premise: supermodel Lula Landry falls to her death from a Mayfair balcony and the police conclude that she committed suicide.

John Bristow believes that his adopted sister Lula was murdered and the police have overlooked key evidence. He seeks out private investigator Cormoran Strike – a man with a colourful past - who takes up the case.

The seemingly endless run of documentaries about the late Diana Spencer continues – but chances are this will be the best of the lot.

Featuring interviews with Diana’s sons, William and Harry, her siblings, Sarah and Charles Spencer, various Royal Household people, as well as then UK Prime Minister Tony Blair and government officials intimately involved that week, this documentary tells the story of the seven days that followed her death as well as the life that preceded it.

If that's not enough for you, there's also Diana: Tragedy or Treason? On TLC at 9.00pm.

Emma Wills is hosting as the latest CBB event reaches its climax.

This time around there could be a cachet with being the 2017 winner, as this show has been on a ratings downward spiral for years. If it is the last ever run, true fame is there for the winner. Well, you know what I mean.

Afterwards, at 11.05pm, Rylan Clark-Neal does the honours for the last Celebrity Big Brother's Bit on the Side.

In the final episode of the series, DJ Paul Oakenfold celebrates 30 years of dance and electronic music in the UK by shining a light on the people and events that turned dance music into a multibillion-pound industry and asks what is next.

This is followed at 10.00pm by a special programme in which DJ Dave Pearce compiles the top 20 greatest acid house tracks, showcasing the people and music that were at the very heart of the rave revolution.

Based on the Stephen King novel of the same name, this spooky tale's about a town in Maine that becomes engulfed in a deadly mist.

Although the scenario remains, the story's characters and sub-plots are brand new, which will probably annoy King's massive fanbase, regardless of whether it works or not.

Included in the changes is what's actually residing within the mist. In the book, the mist contains tentacled monsters that devour the town’s residents. Here, the mist’s terrors are more psychological.

Elton discusses the craft, legacy and importance of the studio sitcom. Sir David Jason introduces the talk with a personal forward about Ronnie Barker and Ben Elton.

The lecture is named in honour of the late, much-loved comedy writer and performer Ronnie Barker, star of The Two Ronnies, Porridge and Open All Hours.

Also on this weekend:

The veteran British comic actor looks back on what's been a pretty amazing career.

This 2009 American comedy-drama film directed by Jason Reitman and written by Reitman and Sheldon Turner, is based on the 2001 novel of the same name, written by Walter Kirn.

It's centered on corporate downsizer Ryan Bingham (George Clooney) and his travels across the US as he suavely sacks all sorts. Vera Farmiga, Anna Kendrick and Danny McBride also star.

Also on this weekend:

Based on the novel of the same name, it's about an aspiring white author during the civil rights movement of the 1960s who writes a book about life amongst African American housemaids. Uplifting etc.

A cracker from late-period Woody Allen, this is about a New York socialite, deeply troubled and in denial, who arrives in San Francisco to impose herself upon her sister. Cate Blanchett is great in the lead, but no one puts a foot wrong here.

Here's the show that started the concept of word-of-mouth binge-watching, as the vast majority of its fans saw it on box sets rather than weekly on the box. It's also brilliant. 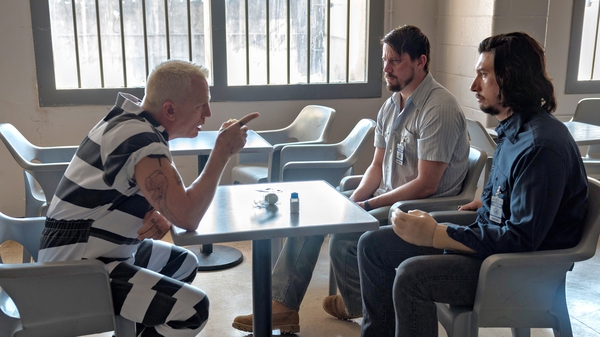