On his final Tonight with Vincent Browne on TV3 on Thursday night, the tenacious host paid tribute to the show's make-up artist "who did her best to ensure my appearance didn't frighten children who stayed up too late".

Browne's poignant and funny sign-off show saw him pay a lengthy tribute to "many of the people who've worked on the programme and endured me during the years", including make-up artist Adrienne Kennedy Campion.

"I met a woman on the streets of Dún Laoghaire some time ago who said, 'You look even worse in real life than you do on television,'" recounted the presenter. "That's thanks to Adrienne."

Browne also thanked "the hundreds of people who came on the programme and contributed so much to it over the nine-and-a-half years".

"I'm sure I'll miss many of the other people who came on to the programme during the years, although many of them probably won't miss me."

He then saluted the public, and the impact they had on his nightly current affairs programme.

"One of the most satisfying features of presenting the programme was the interaction with you, the viewers, through the texts, the emails, the tweet machine and, of course, meeting people personally, notably when going 'round the country to all 40 constituencies in 2015 and 2016 with the People's Debate.

"The only exception being the woman in Dún Laoghaire, and apart from her, everyone I met was kind and encouraging, and I really value that. I also have greatly appreciated the good wishes I've received over the last several weeks since I announced I was leaving the programme - the cards, the presents, the texts, the tweets and the letters."

Browne told his viewers that he's "not quite finished with TV3". "I'll be completing a documentary series on Gerry Adams for broadcast sometime in Autumn," he revealed.

As he looked back on his last nine-and-a-half years on-air and the challenges Ireland faces, Browne said the show he co-presented from Dublin pub The George with Xposé's Glenda Gilson on the day of the Marriage Equality Referendum result was "the highlight of my time doing this programme".

"I just felt so proud... privileged to be there in the middle of the gay community that had at last been affirmed," he recounted. "It was just a wonderful occasion." 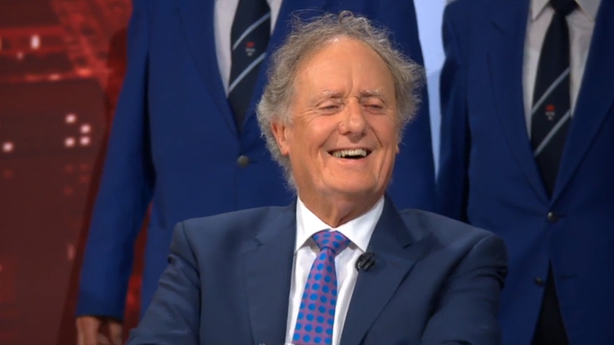 The show ended with Browne serenaded by the Dublin Welsh Male Voice Choir.

"Oh s***," he said in trademark exasperated style as they surprised him in the studio.

It ended with a song...From the Dublin Welsh Male Voice Choir. Thanks to all those who watched, featured in & supported #vinb over the years pic.twitter.com/BWZbB5yW0a