Katy Perry told the crowd enjoying her performance at Glastonbury that she felt cool by being included in the legendary festival's line-up.

The Teenage Dream singer also thanked festival-goers for turning out to see her, admitting that she had not been sure whether she still had such a large fan base.

Greeting the crowd from the festival's main Pyramid Stage, she said: "This makes me feel cool . . . I never feel cool. Am I cool yet?

"Thanks for coming, I wasn't sure if you still liked me."

She later added: "I'm just really grateful that anyone is still listening. As the great Rihanna says, nothing is promised. I started almost ten years ago."

Perry arrived on stage dressed in a sequinned bodysuit with an eye design on the chest and was flanked by a troupe of dancers in lycra bodysuits who were also dressed in a series of headwear including television screens, fluffy pink blocks and mouths with eyeballs inside.

She opened her Saturday evening set with some new songs, but then launched into some of her greatest hits including Teenage Dream, Firework, Dark Horse and ET.

The singer closed with her hit song Roar and as she finished she jumped over the security barrier to crowd surf in the mass of fans who had cheered during her set.

But rather than being passed back over to the stage side of the barrier, Perry was set down on her feet in the thick of the crowd and stopped to greet those around her who took selfies with the star.

Earlier in her performance, Perry had told the audience of her love of festivals.

She said: "I've shared sweat with the person next to me, I've been in the mosh pit, I've started the mosh pit. I'm really just one of you." 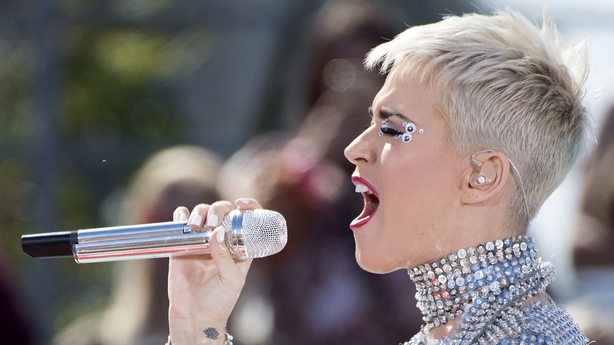