Irish dance duo Lords of Strut have missed out on a place in the final of Britain's Got Talent, but left the stage after delivering the double entendre of the night.

Dancing to Dead or Alive's You Spin Me Round (Like a Record) and using a Ford Escort convertible as a prop, the Cork-based duo of Seán and Séamus were the last act to compete in Friday night's semi-final.

But despite practising their routine "all day", they lost out to the Missing People Choir and comedian Daliso Chaponda.

However, Lords of Strut received a lot of love from the audience and praise from the judges.

"Amanda [Holden, fellow judge] said to me this is like Wayne's World or something," he said.

"You guys are so funny," continued David Walliams. "You just have funny bones, you know? And that is a rare thing. It's a really original act as well, and I was laughing throughout." 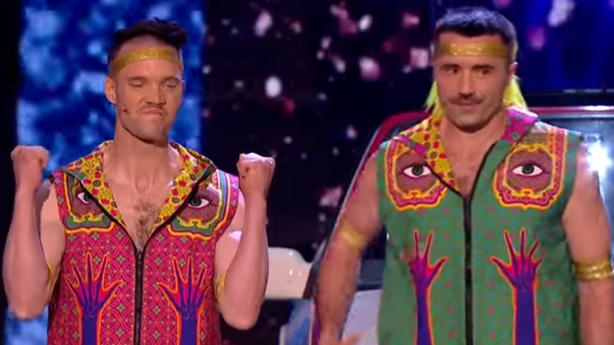 Alesha Dixon hailed the pair as "the new Jedward of Dance". "Despite all the comedy and the craziness and how nutty you are, you're actually really skilful," she said.

Lords of Strut's Seán said the Jedward comparison would not be going on their posters.

Amanda Holden said, for her, the dance duo and comedian Chaponda had been the highlights of the night.

"For me it's like Dumb and Dumber-meets The Wedding Singer," she added.

Co-host Ant of Ant and Dec said he couldn't think of a better way to end the semi-finals than seeing Lords of Strut strut their stuff.

"I love finishing off a semi!" exclaimed Séamus as Ant burst out laughing. But that comedy gold did not see Lords of Strut through to the final when the results were announced.

Alas no #WildCard for us, only a well deserved break before ripping it up in @SomerfestJune #cricklade and #RIOTdublin pic.twitter.com/DYuBsHHyz0

The final of Britain's Got Talent is on TV3 and ITV on Saturday night at 7.30pm, with one wildcard act still to be announced.

What a night, what a week. We're off to bed because our #BGT Live Final line-up is complete. Saturday, 7:30pm on @ITV. Goodnight! 😘 pic.twitter.com/04XC8MPf5r