Irish singer Leah Barniville has missed out on a place in the final of Britain's Got Talent, despite receiving a standing ovation from the audience for her performance.

The teenager from Co Meath competed in Tuesday's second semi-final with young magician Issy Simpson and comedy magician Matt Edwards going through on the night after the public's votes were counted.

Show boss Simon Cowell said that 14-year-old Barniville's performance of Parla Più Piano - the Italian version of Speak Softly, Love from The Godfather - had been fantastic but added: "I wish we had done something more with your staging."

Many viewers were disappointed that neither Barniville nor fellow singer Destiny Chukunyere made it through.

So gutted for you @LeahBarniville, you have the voice of an angel & deserved a place in the final ✨ I hope this isnt the last we see of you!

Oh my GOD!
Leah Barniville just made the hair stand on the back of my neck. She's my winner for BGT even if she wasn't voted @LeahBarniville

How this girl did not get through I've no idea . She is incredible and reminds me of Katherine Jenkins or Charlotte Church years ago 👌✨

@LeahBarniville 's voice is sensational & a talent show doesn't need to prove that, she proved it herself! Absolute perfection🌟 #BGT

Disappointed that @LeahBarniville didn't get through. Incredible voice, perfect song. We all sat quietly to listen, then cheered. 👏👏👏💕 https://t.co/Elfut420BP

Cowell had said "I would hire you tomorrow" after Chukunyere's cover of Aretha Franklin's Respect.

Tonight five-time world champion Irish dancer David Geaney will be hoping for better luck when he takes to the stage.

Geaney, who works in his family pub in Dingle, wowed the judges with a stunning performance, backed by some impressive background visuals.

He told the judges after his last performance on the show: "There's not much of an opportunity to put your talent on a big stage, and BGT is one of the biggest talent shows in the world".

Geaney told his followers on social media that tonight's performance "is dedicated to the victims of the Manchester bombings".

The semi-finals continue on TV3 on Wednesday at 7.30pm. 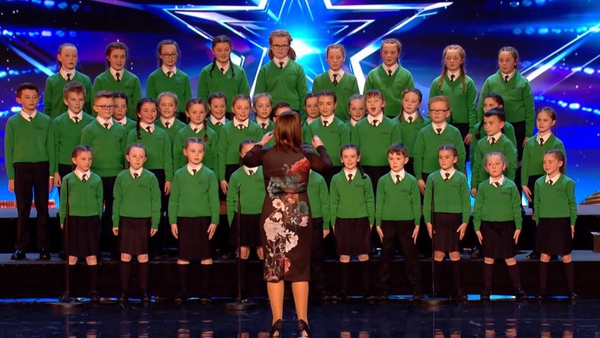 Young Co Down choir knocked out of BGT semi-final