Former Pussycat Doll Kimberly Wyatt has announced the news that she is pregnant with her second child.

She shared her baby news by posting a photograph on Instagram showing her two-year-old daughter Willow cradling her growing baby bump, with the caption: "There's a little bun-ny in the oven. Happy Easter!"
Wyatt is married to model Max Rogers, who confirmed they are expecting another girl. He shared his wife's Instagram photograph, writing: "My THREE girls . . . and a balloon bunny. Happy Easter everyone!."
Wyatt's former Pussycat Dolls band co-member, Ashley Roberts, was among the celebrities who posted a congratulatory message to the couple.
Wyatt - who has also worked as a talent show judge - won the UK's Celebrity MasterChef in 2015 and credited her "inspiring husband" Rogers as part of the reason why she was victorious. 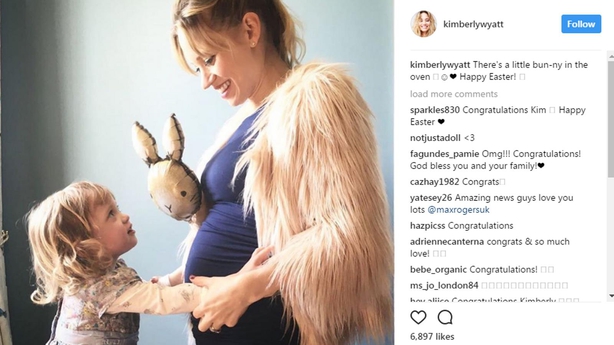