Dancing with the Stars finalist Denise McCormack has told RTÉ Entertainment that the competition isn't getting any easier because all of the remaining contestants are pushing themselves more than ever.

The Red Rock actress and her professional partner Ryan McShane beat Dayl Cronin and Ksenia Zsikhotska in a tense dance-off on Sunday night and secured their place in the final alongside Kerry GAA legend Aidan O'Mahony and his partner Valeria Milova; and former Fair City star Aoibhín Garrihy and her partner Vitali Kozmin.

The competition may be nearing an end, but McCormack says the routines and steps aren't becoming any easier.

"At the beginning if we just got through it we were happy to get to the end. Now, it's not about that. It's about getting the steps right but performing and putting everything into it. So it's getting harder yeah," she added. 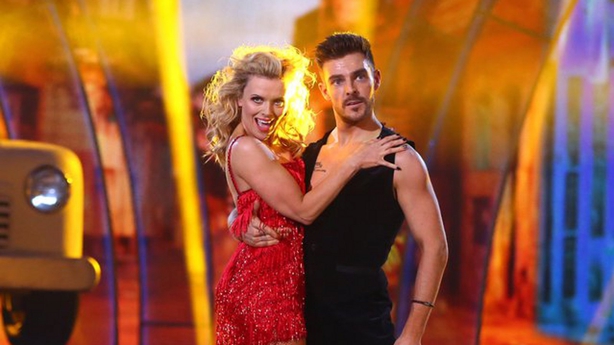 With all three finalists set to perform three routines at the upcoming grand finale the pressure will be taken up a notch.

"We are doing three dances. We are doing two routines that we've done before and then a whole new dance," McCormack said. It's going to be tough doing so many but we'll do it."

The former Love/Hate star was quick to praise the supportive public and admits she appreciates everyone's kind words.

"The public are so supportive. I can't walk down the street without someone saying something lovely to me."

"I feel really happy and really blessed to be in this position. To have that level of public support is something I'll never experience again," she said. I really do feel like the country has gotten behind me.

"Everyone is wishing me well. I've a million cards in my dressing room - and gorgeous ones from kids who have drawn pictures of me. It's a really lovely feeling," McCormack added.