That old joke about how everyone in Ireland is a relation proved to be true on Friday night's Late Late Show when Today host Maura Derrane discovered that she is related to another RTÉ presenter, Bláthnaid Ní Chofaigh.

After Tubridy was informed that he has a distant cousin living in New York and Byrne had been introduced to his fifth cousin in the audience - who, eerily, had been researching his ancestry for the show - attention then turned to Derrane's family tree. 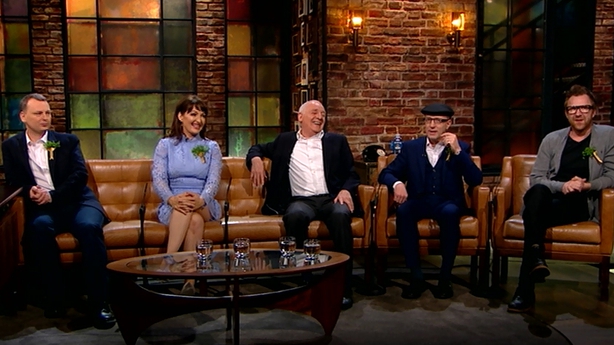 "We found an Irish cousin for you too," revealed Ancestry.ie's Mike Mulligan.

"And here's the interesting thing: you know her... She's a fourth cousin."

He then asked a puzzled Derrane: "Could you hazard a guess of somebody that's possibly in the same business, who might, eh, 'speak-ah the lingo'?"

Eamon Dunphy suggested Miriam O'Callaghan and members of the audience thought Gráinne and Síle Seoige, before it was revealed that Bláthnaid Ní Chofaigh is, in fact, Derrane's fourth cousin.

"With Connemara cousins, it can be complicated," replied Mulligan. "We haven't been able to tie it down, but we think it might be on the Connolly line [Derrane's mother's side of the family].

"But a Connolly in Galway, I mean... It means you probably share a great, great, great grandparent."

The Late Late's family surprises came in the same week that Graham Norton discovered that the artist who won a commission to paint a portrait of him which will go on display in the National Gallery of Ireland is his third cousin.

Gareth Reid, who is originally from Belfast but now lives and works as an artist in Glasgow, won the £10,000 commission after beating 54 international hopefuls to be crowned Sky Arts Portrait Artist of the Year 2017 in the TV show of the same name.

Reid said he could not "quite take in the chances" of the pair being related when they met to make a start on the project.