Nicole Kidman sent the internet into a frenzy when she was spotted bizarrely clapping in a seal-like fashion at the Oscars last month, and now she has finally broken her silence on THAT incident.

The 49-year-old Lion star (or should that be Sea Lion?) has finally explained the reason for her novel way of clapping her hands together - it was to avoid damaging her expensive 13.58-carat Harry Winston cluster pearl-shaped diamond ring set in platinum.

Speaking openly about the incident on the Kyle and Jackie O Show on KIIS 106.5 FM in Sydney, the Australian actress admits she was in an awkward situation.

''I was terrified of damaging my ring," she said. "It was really awkward, and I was like: 'Gosh, I really want to clap'.

''I don't want to not be clapping, which would be worse right? Why isn't Nicole clapping?'

''So therefore I'm clapping but it was really difficult because I had this huge ring on which was not my own but was absolutely gorgeous and I was terrified of damaging it.''

nicole kidman clapping like she just got finished polishing off an entire bag of flamin hot cheetos. pic.twitter.com/3aVLbnNETf

What on Earth is going on with Nicole Kidman’s clapping? #Oscars pic.twitter.com/YFraBODU1q

That wasn't the only wardrobe malfunction for the Oscar nominee on the night as the halter straps of her Armani Privé dress broke within minutes of getting in the car on route to the ceremony.

The straps of the gown were originally crossed over the back and fastened just under her arms.

Speaking previously, she said: ''I had a bit of a panic because my strap on my dress broke when I got in the car.'' 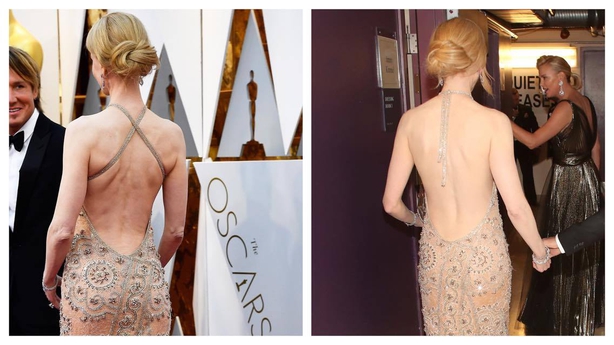 Kidman was nominated for best supporting actress for her performance in Lion at this year's Oscars but the award was won by Viola Davis for her role in Fences.