So let it be written: February 1 became the day the Interweb broke again after Beyoncé announced that she is expecting twins with husband Jay Z.

Revealing the news on her Instagram account, an already heavily pregnant Beyoncé is photographed kneeling in front of a giant hedge of roses, wearing blue satin knickers and a maroon bra. She is covered with a long green veil in the heavily stylised photo.

Accompanying the picture, Queen Bee wrote: "We would like to share our love and happiness. We have been blessed two times over. We are incredibly grateful that our family will be growing by two, and we thank you for your well wishes. - The Carters."

The announcement has already become the most-liked Instagram post of all time, proving a welcome distraction following a tumultuous week in American politics for many more than Beyoncé's eight million followers on the picture-sharing site.

The couple began dating after teaming up on Jay Z's 2002 track 03 Bonnie and Clyde and married in April 2008. Their daughter was born in January 2012.

The announcement has generated enormous coverage on social media - however the award for the top comment goes to Irish comedian Gráinne Maguire with her line about the pregnancy and Donald Trump's oh-so-white cabinet.

The tweet has now gone viral and already boasts over 100,000 likes.

Sad that there are more black people in Beyoncé right now, than in Trumps entire cabinet team.

Attention now turns to this month's Grammy Awards in the US where Beyoncé leads the nominations with nine nods.

It's been confirmed that the star will perform at the show, complete with baby bump and its reported that the singer has been spotted in rehearsals along with her dancers earlier this week.

The 35-year-old now has 62 Grammy nominations across her work as a solo artist and as part of Destiny's Child, making her the fourth most-nominated artist of all time.

The Grammys take place in Los Angeles on Sunday February 12. 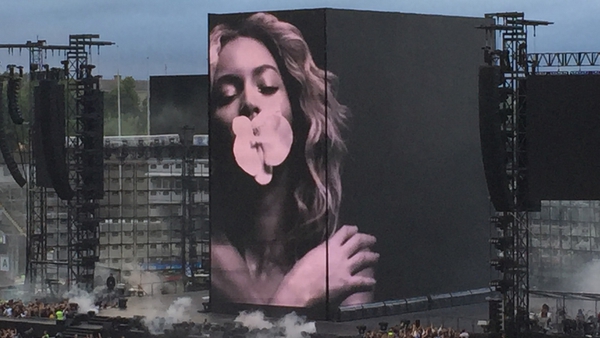 Beyoncé celebrates Beyday with Hold Up video on YouTube